'Ger loved Killorglin, and Killorglin loved him back': The story behind the Mr. Brightside video

It is, arguably, the greatest Irish viral video we've ever shared on JOE.ie.

Falvey's Bar in Killorglin was absolutely hopping last Thursday night as the County Kerry got together for the wake of local legend Ger 'Farmer' Foley.

Brian O'Sullivan's performance of The Killers' Mr. Brightside in front of a captive audience will go down as an emotional, cathartic and mesmerising tribute to 45-year-old Ger, who passed away after living with Cystic Fibrosis.

Ger was husband to Gráinne and father to both Isobel and Peter.

'Ger loved Killorglin and Killorglin loved him back.'The full story behind this emotional video is here - http://bit.ly/1TaXFPvHis family and friends would now like to invite Brandon Flowers to Killorglin to do a set in aid of Cystic Fibrosis research. Brandon has to see this. Video credit: Tim Clifford. 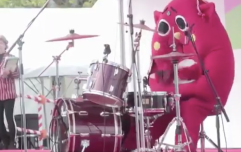 WATCH: Cuddly mascot rocking the absolute f**k out of these drums is bloody hilarious

END_OF_DOCUMENT_TOKEN_TO_BE_REPLACED

Ger's close friend Shane McElroy told JOE that the people of Killorglin would happily welcome Brandon Flowers of The Killers to the town for an extra special live performance of the hit song.

"That song in Falvey's Bar is sung every New Year's Eve, and it was appropriate to do it for Ger," he said.

"Brandon Flowers has given us some happy times in there so we'd be delighted if he saw it, and even happier again if he ever wanted to visit us in Killorglin to help the fight against Cystic Fibrosis."

Tim Clifford, who filmed the clip, spoke of Ger's love for music and his home town. 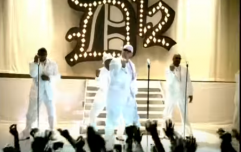 END_OF_DOCUMENT_TOKEN_TO_BE_REPLACED

"As can be seen by the passion in the video, that was all for Ger. Not one for the limelight but he would get a kick out of how his wake has captured the attention of people, and would smile at the thought of Brandon Flowers seeing Brian O'Sullivan on top of the counter in Falveys Bar, belting out Mr Brightside."

The pair worked together on Killorglin's annual K-Fest, which celebrates the best arts talent from the area.

popular
James May reportedly hospitalised after crashing into wall at 75mph filming new show
Disney+ has just added 10 big movies to its library
An exciting Irish crime thriller is among the movies on TV tonight
Netflix has just added an incredibly tense 97-minute thriller
QUIZ: You'll need to be razor-sharp to get 100% in this General Knowledge Quiz
The JOE Friday Pub Quiz: Week 307
A great underseen action thriller is among the movies on TV tonight
You may also like
2 months ago
Johnny Depp case: Man who went viral on TikTok claiming to be a juror admits it was a 'prank'
5 months ago
WATCH: Russian soldier loses fight against door
5 months ago
Everyone is baffled by this optical illusion showing different numbers
7 months ago
Video shows Taiwanese army practicing urban warfare in front of mock Dublin pub
9 months ago
Who started the 'plant one tree for every pet picture' trend on Instagram?
9 months ago
Priest blesses local nightclub in the most Donegal thing imaginable
Next Page