"If my head was turned and it hit me in the temple, it could have killed me."

A concertgoer is said to have been left with blood everywhere after a microphone thrown by Guns N’ Roses frontman Axl Rose during a concert in Australia hit her in the face.

The Adelaide Advertiser reports that Rebecca Howe was left with a bust-up nose and two black eyes following the incident which took place at the Adelaide Oval venue on Tuesday.

END_OF_DOCUMENT_TOKEN_TO_BE_REPLACED

After singing the band's last song 'Take Me Down To Paradise City', Rose launched the microphone into the audience, where it's claimed to have hit Howe who was in the Diamond Stand, which she stated "wasn't even right at the front".

“He took a bow and then he launched the microphone out to the crowd… and then bang, right on the bridge of my nose," Howe told the Advertiser.

An off-duty police officer is said to have then helped move Howe to the side of the crowd. 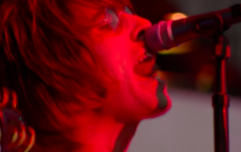 END_OF_DOCUMENT_TOKEN_TO_BE_REPLACED

However, she told the outlet that her injuries could have been much worse.

"What if it was a couple of inches to the right or left? I could have lost an eye," Howe stated.

"What if it hit me in the mouth and I broke my teeth?” she said.

“If my head was turned and it hit me in the temple, it could have killed me.”

In an interview with 10 News First, Howe described how she felt like she had "been hit by a truck" and how she witnessed Rose throw the microphone "but never saw it coming".

#Exclusive: 10 News First speaks with the woman who was hit in the face by a microphone thrown by @gunsnroses frontman Axl Rose at this week's concert at @theadelaideoval.

Rebecca Howe described the blow like being "hit by a truck" and that she "could have lost an eye". pic.twitter.com/3FLbUgVD3z

Responding to the incident, Rose said he felt it had been taken out of context.

In a statement published on social media, the 60-year-old said that he would no longer throw the mic into the crowd - something which is a tradition for his band.

"It's come to my attention that a fan may have been hurt at our show in Adelaide, Australia, possibly being hit by the microphone at the end of the show when I traditionally toss the mic to the fans," he wrote.

"If true obviously we don't want anyone getting hurt or to somehow in anyway hurt anyone at any of our shows anywhere.

"Having tossed the mic at the end of our show for over 30 years, we always felt it was a known part of the very end of our performance that fans wanted and were aware of to have an opportunity to catch the mic.

"Regardless, in the interest of public safety, from now on we'll refrain from tossing the mic or anything to the fans during or at our performances.

"Unfortunately, there are those that for their own reasons chose to frame their reporting regarding this subject in a more negative and irresponsible out-of-nowhere light which couldn't be farther from reality.

"We hope the public and of course, our fans get that sometimes happens."

Rose ended the statement by thanking "everyone for understanding".

popular
5 years ago, Hollywood took a massive gamble on a huge sequel... and lost big time
Netflix has just added 12 very big movies to their library
One of the most underrated crime thrillers of recent years is among the movies on TV tonight
Netflix backtracks on anti-password sharing measures following user outcry
Tom Hardy set to play Hannibal Lecter-type serial killer in new series
The 50 most iconic songs of all time* have been revealed
Netflix has just added one of the best sci-fi movies of recent years
You may also like
1 year ago
Garth Brooks gives cryptic response when asked about Ireland concerts
1 year ago
Garth Brooks in “advanced” talks to play at least three concerts in Croke Park next year
1 year ago
Billie Eilish announces two concerts in Dublin next year
1 year ago
Nelly concert to be screened at Dublin drive-in venue
1 year ago
Bon Jovi concert to be live-streamed at three drive-in venues across Ireland
3 years ago
Nelly, Shaggy and more are coming to Dublin for the ultimate throwback tour
Next Page