LISTEN: Fianna Fáil politician has submitted this song to represent Ireland at Eurovision 2018

It's better than Brendan Murray's 'Dying To Try', that much is for certain.

You might remember when we covered Trevor Gilligan's debut album a few months back, which had a couple of tracks on there which were more than decent.

Now he's back, and hoping to represent Ireland in next year's Eurovision Song Contest, with his dance-pop track 'Keep You Warm'. 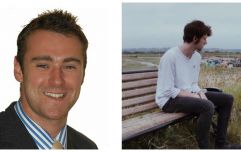 This Fianna Fáil politician has released a dance-pop album, and it's actually not half-bad

END_OF_DOCUMENT_TOKEN_TO_BE_REPLACED

According to the press release, Gilligan "hopes his entry 'Keep You Warm' will match the criteria judges require for the song contest: Gentle Piano, Heavy Bass & Catchy lyrics, but most of all a simple melody."

With the deadline for submissions closing on Monday 6 November, we'll find out soon enough if Gilligan will be going up against Samantha Mumba and The RubberBandits, both of whom made suggestions about potentially getting involved in next year's contest. (Of course - we think - the Bandits were only joking... right?)

Either way, you can check out his new track below, and let us know if you think he - and by extension, all of Ireland - are in with a shot.

The Big Reviewski || JOE · The Big Reviewski with Y: The Last Man, that Malignant ending & a secret streaming service
popular
Cash, Rolexes, cars and one Canada Goose jacket seized in major Garda raid
You could be shopping in an Aldi store with no checkouts in Ireland in the near future
Man (40s) in critical condition following serious road collision in Cork
Government announces special €1,860 payment for laid-off workers during pandemic
New special payment for workers laid off during pandemic - Who is eligible and what are they entitled to?
Men arrested trying to cross New Zealand border with boot full of KFC
QUIZ: Can you 100% this tricky Oasis quiz in just three minutes?
You may also like
2 days ago
Irish Mail on Sunday apologises for "unfairly personal" column critiquing politicians outfits
1 week ago
Micheál Martin hits out at "personal, nasty and unkind" newspaper column
1 week ago
Sinn Féin takes 10% lead on Fine Gael amid controversies, according to latest poll
1 week ago
Micheál Martin could be in a bit of bother next week
2 weeks ago
Taoiseach says he won't "be drawn into" Fine Gael vs Fianna Fáil row
2 months ago
Sinn Féin narrowly beats out Fine Gael as most popular political party in Ireland, according to latest opinion poll
Next Page