Say it ain't so, Justin.

Justin Bieber has come a long way from when he used to be the laughing stock of the music industry.

Sure, he still has his critics, and lots of them, but the general consensus these days is that the guy makes pretty great music.

The only issue is that he doesn't do it often enough.

He featured on the song 'No Brainer' with Chance the Rapper, Quavo and DJ Khaled in the summer of 2018, but these brief features are all we've got from the Biebs in the past while.

His last album, Purpose, came out all the way back in 2015, and since then fans have been craving a proper project from the Canadian superstar.

And although it was seriously teased that his fifth album, which was rumoured to be titled JB5, would be coming out this year, a recent interview with Vogue has seemingly put those theories to bed. 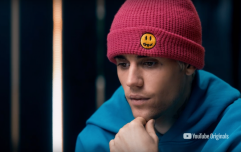 END_OF_DOCUMENT_TOKEN_TO_BE_REPLACED

"Just thinking about music stresses me out," Bieber said. "I’ve been successful since I was thirteen, so I didn’t really have a chance to find who I was apart from what I did. I just needed some time to evaluate myself: who I am, what I want out of my life, my relationships, who I want to be—stuff that when you’re so immersed in the music business you kind of lose sight of."

In the interview, the 25-year-old discusses married life, his success, and many other things, including certain low points in his life.

And as happy we are that he's doing what he wants, we could really do with some new bangers as well...


popular
The lineup for this week's Late Late Show has been revealed
QUIZ: Can you guess the pixellated movie posters?
QUIZ: Can you name all these European countries just from their vowels?
Met Éireann says there's a risk of snow for parts of Ireland this weekend
Man being treated for suspected case of coronavirus in Belfast
Everything Irish fans need to know ahead of the WWE Royal Rumble this Sunday
New Angela Scanlon show to fill Saturday night slot on RTÉ
You may also like
6 months ago
A$AP Rocky won't receive special treatment, says Swedish Prime Minister
7 months ago
Justin Bieber challenges Tom Cruise to a fight in the Octagon
8 months ago
Ed Sheeran and Justin Bieber release new song together
9 months ago
Justin Bieber claims to be "60% Irish" in Instagram post
1 year ago
A new Justin Bieber album has been teased for 2019
1 year ago
Floyd Mayweather's response to McGregor's recent controversy is hugely hypocritical
Next Page