How much money Daniel O'Donnell made last year is absolutely ridiculous

He should expect a call from Floyd Mayweather any day now.

Daniel O'Donnell is a national treasure. Don't believe us? Just take a look at him with these tasty peppered smoked mackerel fillets. 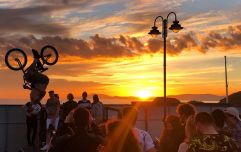 END_OF_DOCUMENT_TOKEN_TO_BE_REPLACED

But when we say he is a national treasure, we place the emphasis on one word. Treasure. Which seems an accurate description for a man who is now said to be worth a whopping €31 million, according to Donegal Daily.

Appearring on The Sunday Times' annual rich list (subscription required), the Kincasslagh man is now worth an estimated 31 million, with the money accumulated through years of album sales and sold out concerts.

O'Donnell was in good company on the list, being joined by Liam Neeson, Niall Horan and Graham Norton in the entertainment section. You can find more info on those men and their millions by clicking here.

Denis O'Brien topped the list with an obscene €4.7 billion in his bank accountant.

Maybe O'Donnell will catch him next year? We're rooting for him.

popular
Netflix has just added 12 very big movies to their library
5 years ago, Hollywood took a massive gamble on a huge sequel... and lost big time
One of the most underrated crime thrillers of recent years is among the movies on TV tonight
Netflix backtracks on anti-password sharing measures following user outcry
Tom Hardy set to play Hannibal Lecter-type serial killer in new series
The 50 most iconic songs of all time* have been revealed
The JOE Friday Pub Quiz: Week 332
You may also like
3 months ago
Irish airport features in list of world’s most beautiful runways
3 months ago
Gardaí investigating "all the circumstances" following discovery of woman's body in Donegal
3 months ago
Man in his 40s dies following Donegal road crash
3 months ago
First funerals of Creeslough tragedy victims to take place on Tuesday
3 months ago
King Charles expresses "immense sadness" over Creeslough tragedy
3 months ago
Here's how to support those affected by the tragedy in Creeslough
Next Page