It's gonna take a lot to drag Mr. Worldwide away from you.

There are few songs more epic than the 1980s class 'Africa' by Toto, and there are few men more revered in modern day music than Pitbull.

Okay, maybe only one of those things is true. But the man certainly knows how to make a hit, so we'll probably still be hearing a lot more of this track whether we want to or not. 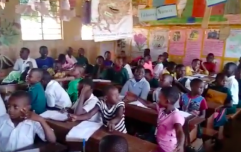 END_OF_DOCUMENT_TOKEN_TO_BE_REPLACED

The Cuban rapper has turned his talents towards a reimagining of 'Africa' for the official soundtrack to Aquaman. This version is called 'Ocean to Ocean,' and features singer Rhea on the chorus.

I hate myself for saying this, but honestly, it could be a lot worse.

It's gonna take a lot to drag me away from you: DALÉ.

The Big Reviewski || JOE · TBR Spotlight: Loki - Episode Two - 'The Variant'
popular
Garda union hits out at "absolute confusion" over outdoor drinking and dining
The Queen appealing for volunteers to weed the garden of her Sandringham Estate
Gardaí will use "discretion" over outdoor drinking at pubs and restaurants
Unvaccinated people will be able to travel abroad this summer with Covid cert, says Leo Varadkar
The JOE Friday Pub Quiz: Week 248
Taoiseach surprised by WHO plan calling for prevention of women of "childbearing age" from drinking alcohol
QUIZ: Can you get full marks in this potentially very frustrating general knowledge quiz?
You may also like
2 months ago
The Ever Given is finally floating again in the Suez Canal
1 year ago
Man drowns while proposing to his girlfriend underwater
2 years ago
South Africa's iconic Garden Route: 5 reasons why it's legitimately breathtaking
2 years ago
Passenger plane carrying 157 people crashes en route to Nairobi, Kenya
2 years ago
'Africa' by Toto to play on a loop forever in art installation in Namibian desert
2 years ago
Kerry farmer donates his last dairy cow to Rwandan family and it has helped to change lives
Next Page