They're not that bad, surely?

In what was unquestionably the biggest news of the weekend, '00s chart botherers The Pussycat Dolls dramatically reunited on prime time television.

Convening together for the first time in over a decade, the Los Angeles quintet performed new single 'React' on the final of The X Factor: Celebrity on Saturday evening. 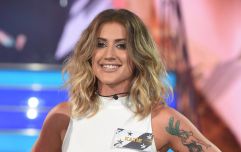 END_OF_DOCUMENT_TOKEN_TO_BE_REPLACED

True to its name, the performance of the track provoked quite the response.

UK communications regulator Ofcom subsequently received no less than 419 complaints from the viewing public, mostly due to the nature of the supposedly raunchy dance moves and related attire on display.

"We are assessing the complaints against our broadcasting rules, but are yet to decide whether or not to investigate," a spokesperson for Ofcom told Sky News.

As for the show itself, reality TV star Megan McKenna (us neither) was crowned the overall X Factor: Celebrity champion.

No word yet on just what kind of censure Nicole Scherzinger and company can expect when Ofcom pass judgement, but you can view the offending act below, should you be so inclined.

Clip via The X Factor UK

popular
Police special operations unit seize mother's e-scooter after she took child to school on it
Omniplex Cinemas are hiring for an awesome and very rare job
Wrestling legend Hulk Hogan 'paralysed from the waist down'
Prime Video has just added one of the best dramas of the last decade
Richard Madeley apologises after calling Sam Smith 'he' and bungling guest's pronouns
An extremely tense true crime drama is among the movies on TV tonight
Parents left in shock after gorillas start mating in front of kids at zoo
You may also like
1 year ago
ITV says there are "no current plans" for a next series of The X Factor
3 years ago
The X Factor looks set to be axed and replaced by a celebrity version
4 years ago
X-Factor cancel all of Saturday's votes following the sound issues during two contestant's performances
4 years ago
21-year-old Irish contestant gets the golden buzzer on The X-Factor
4 years ago
QUIZ: How well do you remember these former X-Factor contestants?
4 years ago
Louis Walsh explains why he grabbed Mel B's backside on television
Next Page