This Irish band, singing As Gaeilge, is heating up the music scene with their sound

The newest sound to create a stir in Ireland.

There's a very strong boy band vibe about the Seo Linn group and that's because in many respects they are just that. But there is one small difference, they are an all-Irish band singing popular songs translated into Irish.

END_OF_DOCUMENT_TOKEN_TO_BE_REPLACED

The group have been gigging around Ireland and are currently putting an EP together having just finished a highly successful Kickstarter campaign. The six guys managed to raise over €50,000 with the scheme, becoming the most successful Irish act ever to use the online fundraising scheme

We sat down with the lads to find out what they were all about... 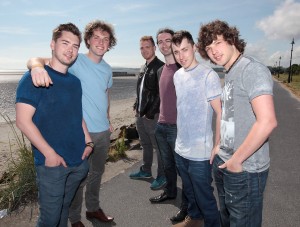 What was your background before setting up Seo Linn?

END_OF_DOCUMENT_TOKEN_TO_BE_REPLACED

Well, we all met when working in Coláiste Lurgan, but we all have different backgrounds in many ways; Stiofán is a teacher from Roscommon and is big into football.

Conor is from Wexford and has been drumming all his life with various groups over the years.

Cathal is from Dublin and has been teaching maths in Trinity and DCU.

Daithí, Kev and Keith are all from Kilkenny. They couldn’t get on the hurling team so Keith and Kev had to take up trad music instead, while Daithí tried his hand at a bit of rugby.

Why did you choose to go into the music market instead of teaching or something similar? And what research did you undertake before starting out?

Well, we had been making videos together in Coláiste Lurgan for many years and the natural progression from there was to set up a band so we could start gigging.

Three of the lads are teachers and were looking for any excuse to avoid the paperwork! With the workshops we’ll be getting the best of both worlds anyway – it will be a more informal setting where we’ll have a bit of craic as Gaeilge.

We got a great boost the last few months with all the positive feedback we were getting after our manager sent our feeders to lots of different schools.

We have been writing songs non-stop for the last few months now too and we can’t wait to get into the studio and get our EP down. We will be gigging around Ireland very soon too and to be honest, that’s out favourite part of the whole thing!

Was it difficult to stand out from the crowd at first?

Yes and no, I suppose! At the very beginning we were just another band, but we were different because of the Gaeilge.

It was hard at the start to try and adjust and improve so much in such a short space of time and, with jobs and college along with other commitments, it was a slow enough process in some ways.

Now that we’re full time, we’ve no excuse! We can really feel the difference even in the last few weeks.

The Kickstarter campaign really showed us that there’s a demand for what we do and being the most funded Irish act EVER on Kickstarter.ie has given a real boost.

The creative juices are flowing and we’re working harder than we’ve ever done! We’ve a new look, we’re writing new stuff and we just can’t wait to get out there and get gigging.

What kind of musical services do you offer? Do you have any advantages over your competitors?

We do all kinds of gigs from festivals to corporate shows, we are now recording a live cover video as Gaeilge to build up online material and we’re gaining great traction with bookings for our workshops too.

Our gigs and shows provide a mixture of popular songs as Gaeilge along with our own original material and a blast of Irish culture too! We love gigging and believe very strongly in a high energy and fun approach. We are going into studio in the next few weeks to get our own original EP recorded and ready to get out there!

We have started producing recordings of live covers of popular songs that we have translated into Gaeilge. We will be putting them up on our Seo Linn channel soon to add to the store of Irish language songs that are available to people online.

We will be providing workshops all across the country in schools and elsewhere. These workshops will be fun and engaging and help get participants involved in drumming, playing and singing songs as Gaeilge with a view to recording the track!

What has been your biggest barrier since setting up the band?

The biggest barrier without a doubt has been the various commitments that everyone has had with jobs and colleges etc. Going full-time is going to change everything for us!

Have you had many musical mentors? What has been the best advice they’ve given you?

We wouldn’t be where we are without the help from a number of individuals. Mícheál Ó Foighil, owner of Coláiste Lurgan, Joe Clarke from CWB who helped guide us on our way in the early part of our career, and last, but certainly not least, Troy Armour has recently been the breath of fresh air that we have needed to get ourselves to the next level.

What has been your greatest moment since setting up?

We’ve had a number of amazing moments since Seo Linn has come into being.

Our trip to Uganda with Gorta Self-Help Africa was a life experience that will never be forgotten.

Our first single, 'Ar Scáth a Chéile' was written there in support of Gorta Self-Help Africa and is a song that is very close to our hearts because of such.

Our two gigs in the Academy were massive milestones.

We’ve played for the President four times and travelled to Boston gigging, but the greatest moment for us was the realisation that people believe in what we’re trying to do for Gaeilge.

The incredible support we garnered throughout the Kickstarter campaign has been humbling and inspiring. The realisation that we were finally able to go fulltime with music and Gaeilge, our two passions, was an amazing feeling!

And your worst moment?

I suppose the worst was just before we met our new manager, Troy. The band had plateaued at that point and we were struggling to progress with all our other commitments.

Meeting Troy gave us the focus, drive and know-how to take us to the next level. It’s given us a new lease of life!

What are your three pieces of advice you would you give to somebody starting off on a new creative venture, musical or otherwise?

What are your “cheats” or “hacks” for making life easier in the business side of things?

If you are not sure about how to handle a situation, ask someone who is!

Friendships and positive working relationships are everything in this area.

Make sure that you keep people that are important to you – family, partners and friends in the loop so that you have a foundation of support. With all of these in place and a direct route to your goal, you will succeed!

Who would you prefer to face off with in a fight to the death: Bill Gates or Donald Trump?

Donald Trump… Bill Gates has to have some Tony Stark stuff lined up for just such an occasion!

popular
Netflix has just added one of the funniest shows of the last 10 years
Netflix has just added 12 very big movies to their library
Spielberg's best movie is among the movies on TV tonight
Police believe they know what happened to Nicola Bulley
The 50 most iconic songs of all time* have been revealed
The JOE Friday Pub Quiz: Week 332
QUIZ: Can you get 15/15 in this Irish general knowledge quiz?
You may also like
15 hours ago
The JOE Friday Pub Quiz: Week 332
3 days ago
Actor to play Michael Jackson in new biopic has been revealed
1 week ago
DJ accidentally shoots herself in the face with a confetti cannon while performing
2 weeks ago
The Last Of Us Episode One features an absolutely perfect needle drop
3 weeks ago
The JOE Friday Pub Quiz: Week 329
3 weeks ago
Eminem turned down $8m to perform with 50 Cent at the World Cup in Qatar
Next Page