"You could fit all the people with Covid [in hospital] in this state on a single double-decker bus".

Aontú leader Peadar Tóibín has said that the recent unrest in Dublin City Centre was "manufactured" by the Government.

Speaking on RTE's This Week In Politics he said that he would "not blame young people" for the events which have occurred in the city over the past number of nights.

END_OF_DOCUMENT_TOKEN_TO_BE_REPLACED

He said: "I would not blame young people for this. 60% unemployment rates now among young people in this country, they've had 15 months of phenomenal sacrifices made themselves in regards to what has happened, even though they are the sector of society that are least at risk from this illness.

"The Government are asking people to have an outdoor summer, the Government manufactured the events that we saw in the streets of Dublin over the last number of nights."

Tóibín added that although the restrictions are set to change from tomorrow to allow outdoor services in pubs and restaurants, it is "mind-bending" that pub owners were prevented from selling pints except "to people who are mobile on the street".

The TD said that there was a lot of "group-think" in the Government at the moment, saying that all parties except Aontú wanted to extend emergency powers until November.

"Covid is a serious illness but right now there are only 74 people in hospital with Covid, you could fit all the people with Covid [in hospital] in this state on a single double-decker bus, and yet this Government have said that they won't open pubs and restaurants [indoors] for another month," he continued. 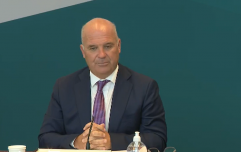 END_OF_DOCUMENT_TOKEN_TO_BE_REPLACED

The Big Reviewski || JOE · TBR Spotlight: Loki - Episode Six - 'For All Time. Always.'
popular
The 50 most iconic songs of all time* have been revealed
Dublin cinema named best cinema in all of UK and Ireland
Only Murders in the Building is a must-watch for fans of true crime podcasts
PICS: The man with the biggest penis in the world has one unbelievable problem with it
People think they've figured out the ranking of the viewers on your Instagram Stories
Making A Murderer: The explosive and NSFW telephone call that implicates a new killer
Michael Jackson fans are convinced he's still alive after spotting him in daughter's selfie
You may also like
11 hours ago
Benefits of vaccinating 12-15 year-olds against Covid-19 "significantly outweigh the risks", says NPHET
12 hours ago
Stephen Donnelly confirms children will not need Covid-19 vaccine to attend school
12 hours ago
Full details of the 38 walk-in vaccination centres opening in Ireland this weekend
16 hours ago
Number of people claiming PUP falls to lowest ever level following reopening of indoor dining
17 hours ago
Irish public advised of top tips to avoid being pestered on 'Flying Ant Day'
19 hours ago
Man in his 60s dies following fatal single-car crash in Kildare
Next Page