Senator Bernie Sanders has announced that he is running for President of the United States again.

Sanders, a senator for the state of Vermont, failed in his Democratic primary bid during the 2016 election — losing out to Hillary Clinton, who was eventually beaten by Donald Trump.

Today, he announced that he would be trying to topple Trump in 2020. Speaking on Vermont Public Radio, Sanders said: "Three years ago, during our 2016 campaign, when we brought forth our progressive agenda we were told that our ideas were ‘radical’ and ‘extreme.' 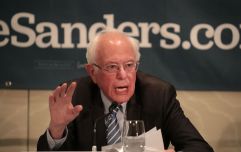 END_OF_DOCUMENT_TOKEN_TO_BE_REPLACED

"Well, three years have come and gone. And, as result of millions of Americans standing up and fighting back, all of these policies and more are now supported by a majority of Americans."

Throughout the 2016 primary, Sanders went from a relative unknown to a political figure known the world over for his support of free healthcare, free college tuition and other social-democratic policies.

While Sanders is officially an Independent, he will be competing through the Democratic primary process.

The 77-year-old, who would be 79 by the time of his inauguration, has joined a very crowded field of possible nominees, including Sen. Kamala Harris, Sen. Cory Booker, Sen. Kirsten Gillibrand, Sen. Amy Klobuchar, and Sen. Elizabeth Warren. Other less well-known politicians include Julian Castro, Pete Buttigieg and John Delaney (no, not that one).

The field is expected to grow even further, with other big names like Joe Biden considering a bid for the highest office in the world. Former Texas congressman Beto O'Rourke — who endured chants of go back to Ireland when he tried to take Sen. Ted Cruz's seat — is also mulling over a tilt at the Oval Office.

The Democratic primary elections officially begin on 3 February next year, with the Iowa caucus.

The Big Reviewski || JOE · The Big Reviewski with Y: The Last Man, that Malignant ending & a secret streaming service
popular
One of the most-anticipated movies of the last few years is finally available to watch at home this week
The 50 most iconic songs of all time* have been revealed
PICS: The man with the biggest penis in the world has one unbelievable problem with it
Government announces special €1,860 payment for laid-off workers during pandemic
It looks like Garth Brooks will play FIVE nights in Ireland after all
Gardaí warn of scam involving "inappropriate or sexual images" after young boy blackmailed for money
Simon Harris and wife welcome arrival of new baby boy
You may also like
7 months ago
Bernie Sanders is using his inauguration meme to raise money for charity
8 months ago
Make your own Bernie Sanders meme in any location with this website
1 year ago
Joe Biden defeats Bernie Sanders in three major states in US election primaries
1 year ago
Joe Biden seizes frontrunner spot to take on Donald Trump following spate of wins on Super Tuesday
1 year ago
Bernie Sanders wins Democratic primary in New Hampshire
1 year ago
US election: Results delayed in Iowa democratic vote due to "inconsistencies"
Next Page