It was due to objections made by four nearby residents.

Tayto Park was given the go ahead back in February to begin planning the park's expansion, which would have included the construction of a new €14 million metal rollercoaster, tentatively titled 'Coaster 2021'.

However, An Bord Pleanála have since denied planning permission, in response to objections made by four residents who live in the area.

The four people, who all live less than half a kilometer from Ireland's biggest theme park, made a joint complaint, claiming that the screaming from the passengers on the new rollercoaster would increase noise disturbance in the area.

There was also concern that 'Coaster 2021'  would have a negative impact on a nearby EU protected site - the River Nanny Estuary and Shore Special Protection Area - as well as fears that the new proposed development would be at risk of flooding.

'Coaster 2021' would have been one meter shorter than Tayto Park's current high point - the 32 meter tall Cú Chulainn rollercoaster - and it was set to be 972 meters in length. 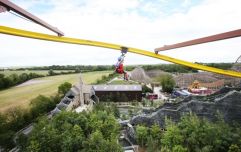 END_OF_DOCUMENT_TOKEN_TO_BE_REPLACED

The new rollercoaster would have provided 40 new full-time and part-time jobs at the park, and in response to the ruling, a statement from Tayto Park said that "the management of Tayto Park is very disappointed to be informed today of the decision by An Bord Pleanála to refuse the planning application for the construction of two new Roller Coasters at Tayto Park".

They are also concerned that if a new attraction is not added soon, then "the longer term viability of the park would be brought into question".


popular
QUIZ: How many of these Recess characters can you name?
QUIZ: Can you guess the pixellated movie posters?
The lineup for this week's Late Late Show has been revealed
Met Éireann says there's a risk of snow for parts of Ireland this weekend
QUIZ: Can you name all these European countries just from their vowels?
Man being treated for suspected case of coronavirus in Belfast
Aldi to recruit 550 new staff and implement living wage rate for employees
You may also like
4 months ago
Grab the kids: Under 12s go free to Tayto Park this weekend
5 months ago
Tayto Park will be letting twins in for free this Saturday
6 months ago
Here’s everything you need to know about Tayto Park FunFest this weekend
9 months ago
Absolutely bonkers line-up announced for brand new music festival at Tayto Park
1 year ago
Two Irish attractions have been named as some of Lonely Planet’s best new experiences for tourists
1 year ago
If you've ever wondered what Buffalo-flavoured Hunky Dorys are made of, we have the answer
Next Page