Warwick Tory Counsellor Nick Harrington has resigned following a controversial tweet about Ireland he posted during the Eurovision Song Contest on Saturday night.

In the most controversial of a number of controversial tweets posted during the contest on Saturday night, Harrington reacted to Irish jury members failing to give a single point to the UK with the tweet below. 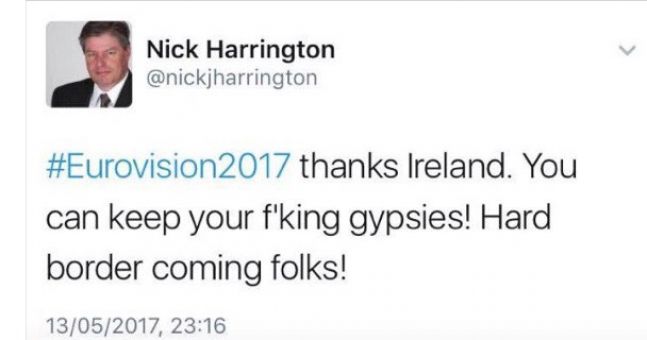 END_OF_DOCUMENT_TOKEN_TO_BE_REPLACED

Naturally enough, the tweet provoked a stream of outrage and prompted Harrington to delete his account, but with screenshots of the tweet popping up all over the Internet, Harrington was duly suspended.

On Wednesday afternoon, he announced his decision to resign; his offensive tweet about Ireland, meanwhile, is still the subject of a police investigation.

In a statement, Harrington said: “To the residents of Stoneleigh and Cubbington Ward,

END_OF_DOCUMENT_TOKEN_TO_BE_REPLACED

“On Saturday 13th May 2017, whilst watching the Eurovision Song Contest, I thoughtlessly sent a tweet that caused considerable offence to both members of the Traveller community and to those of Irish heritage.

“I apologise unreservedly. My comments about the Irish border were also foolish. In addition there have been comments about my Facebook post of an entry in a scarecrow competition last year which was based on the Olympics. I accept this was ill-judged for which I apologise to Christine Ohuruogu.

“Therefore it is with deep regret that I formally tender my resignation as Member for Stoneleigh and Cubbington Ward effective immediately.

“I am devastated that I have caused these events and apologise unreservedly to all constituents of Stoneleigh and Cubbington Ward and to the wider public for the offence I have caused.

END_OF_DOCUMENT_TOKEN_TO_BE_REPLACED

“It has been an honour and privilege to serve as a Councillor supporting the residents of Stoneleigh and Cubbington and I wish the next elected Member every success working with the dedicated and hardworking Clerks and Parish Councillors in the Ward.”

Leader of Warwick district council, councillor Andrew Mobbs, also released a statement on Harrington’s resignation, which read: "I can confirm that Nick Harrington has resigned from his role as Ward Councillor for Stoneleigh and Cubbington Ward today (Wednesday 17th May) and I also understand that he has resigned from his role as a Councillor on Weston Under Wetherley Parish Council. I believe his resignation to be entirely appropriate. He is, however, still under investigation by the Police who will no doubt update us as soon as they have made their report.

“I am very disappointed that his comment was made in the first place and by the reaction it generated towards the district council on social media.

“Nick Harrington was not an employee of Warwick District Council and so I would like to add that his attitude and comments are in no way supported by the district council, or are in any way a reflection on the progressive and dedicated staff that work for the council."

popular
People want "offensive" Crown Paints advert banned after attracting hundreds of complaints
Netflix has just added 23 very big movies to its library
Human remains found in suitcases are the bodies of two children
Here's how to make €9-11 on Revolut in just a few minutes
QUIZ: Can you identify the famous song from the opening line?
The prequel to one of the best twists of all time and 7 more movies & shows to watch this weekend
New car-free town with population of 85,000 set to be built in Dublin
You may also like
13 hours ago
Deer spotted on road between M11 and M50 as drivers urged to take care
15 hours ago
Man arrested on suspicion of the murder of Irish man in London
1 day ago
Galway City Council street cleaners claim Lotto jackpot worth over €5.5 million
1 day ago
HSE broadens monkeypox vaccine programme as 6,000 in Ireland could have heightened infection risk
1 day ago
Dunnes Stores recalls children's pyjamas over suffocation risk
1 day ago
Elderly Irish man stabbed to death on mobility scooter in London
Next Page