No more shouting at the modem.

Ah yes, rural Ireland internet. It's bearable when you are younger and have no choice but to wait what feels like a million years for a page to load. However, when you move out and find that the rest of Ireland's broadband service is actually extremely fast compared to home, you realise just how bad the situation is in rural areas.

That is all about to change with the introduction of a new broadband rollout. 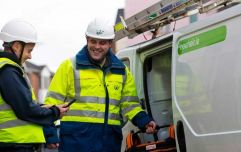 END_OF_DOCUMENT_TOKEN_TO_BE_REPLACED

According to The Independent, a number of west of Ireland towns are set to become Ireland's fastest fibre-powered broadband hotspots in the next two years.

This rollout would see the likes of Ballinasloe, Roscommon Town and several places in Donegal enjoy a better service than those in cities like Dublin, Cork and Limerick.

Telecomms firm Enet and energy company SSE are to connect 115,000 homes and businesses to fibre broadband in communities already assigned for another fibre broadband rollout scheduled from Eir.

The joint effort will cost both Enet and SSE around €100 million but the new service will see maximum broadband speeds in Irish cities become half of what will be available in rural towns.

Minister for Communications, Denis Naughten, welcomed the move saying that the "super fast high-speed broadband... will ensure communities are sustained and business can flourish in towns and rural Ireland.”

The Big Reviewski || JOE · The Big Reviewski with Y: The Last Man, that Malignant ending & a secret streaming service
popular
The five "best places to live" in Ireland have been revealed
The 50 most iconic songs of all time* have been revealed
The JOE Friday Pub Quiz: Week 261
One of the better Liam Neeson action romps is among the movies on TV tonight
PICS: The man with the biggest penis in the world has one unbelievable problem with it
QUIZ: Flex your brain definition with this general knowledge quiz
People think they've figured out the ranking of the viewers on your Instagram Stories
You may also like
2 years ago
Here's where all these jokes about "30-50 feral hogs" came from
3 years ago
A new list of 'sexting' acronyms is doing the rounds on Twitter
3 years ago
This is how you can watch the Winter Solstice in Newgrange online this week
3 years ago
Porn star Mia Khalifa publicly posts DM from the man who wants to kill the internet as we know it
3 years ago
America has made a fundamental, damaging change to how people will have access to the internet
3 years ago
It's official - Ireland is the third most expensive country in the EU for broadband
Next Page