In the midst of a political crisis, the internet reacted to Leo Varadkar being at the IRE v ARG match

We all need some down time, we guess...

As we reported earlier today, Fine Gael are losing supporters in light of the potentially impending general election.

Leo Varadkar said that he will not be seeking the resignation of Tánaiste Frances Fitzgerald, and today the Taoiseach and Fianna Fáil leader Micheál Martin had a meeting in order to reach some kind of decision about what happens next within the government, but no such decision has yet been reached. 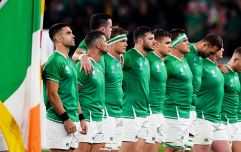 END_OF_DOCUMENT_TOKEN_TO_BE_REPLACED

Despite the country facing a very unsure political future, the coverage of tonight's match between Ireland and Argentina, which resulted in a positive but underwhelming 28-19 win for the Irish team, featured a cutaway with Varadkar in the crowd.

Listen, we all know that R&R is essential for a clear mind, especially with Varadkar heading into more meetings with the FF leader tomorrow, but the internet did clock his appearance during this very testing time for the future of the country...

Can't help but feel Leo Varadkar could be spending his time better than being at the Aviva this evening, of all evenings #IREvARG

@campaignforleo enjoying a chewing gum at the match! #IREvARG

It’s good to know the country is in such a good place that Leo Varadkar is at the rugby :)))))) #IREvARG

popular
Dublin beauty salon owner arrested after reopening for second consecutive day
Johnson & Johnson one-shot vaccine safe and effective, FDA finds
Government looks set to abandon €9 substantial meal rule this year
10 years on, the ultimate example of Great Trailer Terrible Movie has yet to be topped
The full list of all the new shows and movies coming to Netflix in March
Galway Lotto players urged to check their tickets for unclaimed December prize
The expiry dates of driving licences has been extended again
You may also like
2 days ago
Craig Casey and Johnny Sexton combination backed for Italy clash
2 weeks ago
Defence grows for Billy Burns after one of the roughest days of his rugby career
3 weeks ago
Major upside to Ireland's Six Nations challenge that should make all the difference
4 weeks ago
John Cooney comes to defence of JJ Hanrahan after kicking criticism
1 month ago
Cardiff conversation that proved Paul O'Connell always put the team first
1 month ago
Ian Keatley on Ronan O'Gara's deadpan advice and his most treasured Munster jersey
Next Page