In this world that we live in, it's undeniable that the news can be a bit depressing from time to time.

Having said that, bad news has never been directly blamed for making anyone's hair fall out... Until now.

Over in Russia, a Moscow resident is blaming his receding hairline on reading too many negative news stories. 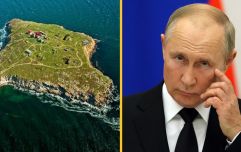 END_OF_DOCUMENT_TOKEN_TO_BE_REPLACED

As a result, he's in the process of trying to sue Russia's Yandex News (known as Russia's answer to Google) for 1 million rubles - that's around ten grand to you and me.

As reported by Mashable, Roman Maslennikov argues that the search engine has churned out so much bad news in recent times that it's caused his hair to fall out.

His lawyer, Vladimir Zhiganov told RIA Novosti that the lawsuit asks for "the recovery of moral damages worth one million rubles" and was filed at Moscow's Khamovniki court.

"We are also asking Yandex to be more attentive when checking the headlines of the published news stories," Zhiganov said.

popular
Gardaí unveil new Armed Support Unit vehicles to replace older models
Netflix has just added 33 very big movies to its library
The full list of cancelled flights in and out of Dublin Airport on Monday (so far)
One of the greatest crime movies of all time could be getting a sequel
Amazon Prime Video has just added 51 big movies to its library
Increase in passenger charges at Dublin Airport may be on the way
An action-packed thriller is among the movies on TV tonight
You may also like
1 month ago
"Rocky" years ahead for consumer energy prices in wake of Russian oil ban, warns Taoiseach
1 month ago
Morgan Freeman has been banned from entering Russia
1 month ago
"We're not intimidating anyone" – Russian State TV fires back at Taoiseach's apology request
1 month ago
Elon Musk claims he's being threatened by Russia over supplying internet to Ukrainians
1 month ago
U2 perform in Kyiv metro station following invite from President Zelensky
2 months ago
No permission given to Russian Victory Day rally in Phoenix Park
Next Page