He is among just over 1,000 candidates who have made it through to the second round for the Mars One mission

A Dutch company have been accepting applications from hopeful candidates who want to go on a one-way trip to Mars, and after being inundated, they have trimmed the initial list down to 1,058. Originally, 850 people applied from Ireland (surely things aren't that bad here, are they?), but that final list includes just one Irishman and another man who is resident here in Ireland, who might make the final cut and be sent off to Mars, never to return.

Filmbase managed to sit down with Steve Menaa, an IT professional who lives in Cork but is originally from France, and has made it to the next round of applicants. Stephen McKeown from Mullingar who works in financial services is also featured in the short film, and was a public candidate in the first round. Not featured in the video is Joseph Roche of Kildare, who is in with a chance of making the journey as a finalist in the list of 1,058 candidates who have progressed this far. 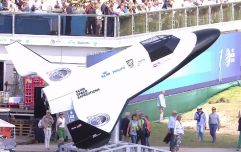 END_OF_DOCUMENT_TOKEN_TO_BE_REPLACED

The Irish Times managed to have a chat with Joseph to discuss what lies ahead, including a rigorous training schedule which would take eight years should he be successful.

"For some people it’s very scary" Roche told The Irish Times, "but there are plenty of people who want to go to Mars and spend the rest of their lives there, to explore this strange new world. There’s a certain breed of people who dream about this."

Considering that they will be sent off to set up a colony, it can seem like a great idea initially, but there are obviously a few drawbacks, one being that you will never see any of your friends or family again, so it was clearly a tough decision. Steve Menaa admitted that he hasn't told his 14-year-old son yet, and that would be the toughest challenge should he be successful.

According to The Independent, they wouldn't be on their own up there for too long however, as a mission to populate the Red Planet would be ongoing, sending two people every two years to join the human colony.

Hat-tip to WhyBecauseScience.com for the pic, The Irish Independent and The Irish Times.

popular
Gardaí warning people not to make unnecessary journeys in anticipation of Storm Barra
Carlow woman banned from keeping animals for life after starving dogs to death
Landscapers is the ultimate true-crime murder mystery show
"Danger to life" risk with Storm Barra "weather bomb", warns Met Éireann
Man dies after being attacked by newly calved cow in Mayo
The JOE Movie Quiz: Week 131
An underseen Keanu Reeves adventure is among the movies on TV tonight
You may also like
7 years ago
Vine: This is easily the most incredible time-lapse vine from space you'll see today
7 years ago
Pic: Astronaut tweets amazing images of the Northern Lights from space
7 years ago
Video: Check out Chris Hadfield’s ‘An Astronaut's Guide to Hurling’
7 years ago
Video: Chris Hadfield talks about going blind in space and how to overcome fear using spider webs
7 years ago
Pic: This NASA astronaut’s selfie from space puts all the other selfies in the shade
7 years ago
Pic: Sliotar-gazing: Commander Chris Hadfield plays some hurling in Dublin
Next Page