The fire risk is expected to peak significantly on Monday.

The Department of Agriculture has issued a status orange forest fire warning for all of Ireland, which is set to remain in effect until midday on Tuesday 23 April.

As per the department's official warning statement: 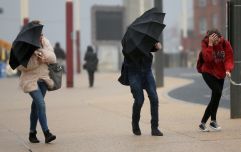 END_OF_DOCUMENT_TOKEN_TO_BE_REPLACED

"Arising from Easterly High Pressure conditions and forecast high temperatures, a High Fire Risk exists in all areas where hazardous fuels such as gorse, heather, dried grasses and other dead vegetation exist.

"In some areas, fire risk condition may be moderated temporarily by scattered light rain during the time-frame of this notice.

"The projected meteorological fire risk is likely to be further compounded by additional ignition risks arising from the forthcoming Easter Bank Holiday Weekend.

"Most recent fire incidents appear to have taken place on lands associated with turf cutting, but additional risks may also exist on areas commonly used for public recreation.

"On this basis, the highest degree of vigilance is warranted by forest owners and managers during the long weekend. Fire risk is expected to peak significantly on Monday 22 April."

This is most likely due to the unseasonably good weather we've had over the Easter break, which the latest predictions see keeping the temperatures up as high as 22 degrees on the Monday, before dropping back to regular April temperatures by Wednesday.

The Big Reviewski || JOE · Colm Meaney & his Pixie co-stars on deadly gangster priests, Irish accents & pickled onion crisps
popular
Micheál Martin responds to claims that he is "protecting the pubs in Dublin"
Donald Trump seems to indicate he will run for Presidency again in 2024
What the hell is 'Stomp and Holler', and why does Spotify insist that you love it?
Here's Week 58 of JOE's 19 in 90 quickfire quiz
Elliot Page – Inception and Juno star announces he is transgender
Sale of luxury castle in Kerry, described as "one of Ireland’s best kept secrets”, completed for €4.5 million
28 individuals identified as being participants in Pandemic Unemployment Payment fraud
You may also like
3 weeks ago
QUIZ: Can you identify these Irish towns on a map?
3 weeks ago
QUIZ: Can you name all the US states with a smaller population than Ireland?
1 month ago
7 gazebos from €40 to €12,000 for your outdoor entertaining
2 months ago
QUIZ: Can you name all 32 counties in Ireland in under 4 minutes?
2 months ago
QUIZ: Name the county from the beautiful attraction
2 months ago
Figures reveal average weekly earnings in Ireland in second quarter of 2020 were €819.13
Next Page