It's going to get wet out there folks.

Although the weather has felt like it has been picking up over the past while, it looks like it's not all sunshine and picnics just yet...

So if your weekend plans consist of anything that involves the outdoors, take note. 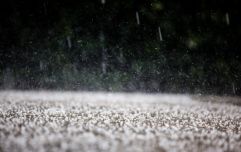 END_OF_DOCUMENT_TOKEN_TO_BE_REPLACED

A status yellow rainfall weather warning has been issued for Galway, Mayo, Clare, Cork and Kerry, as between 25mm and 45mm are expected in those counties.

The potential for higher rainfall amounts is also expected in mountainous areas.

The weather warning was issued on Friday night, but will not come into place until 8pm on Saturday 13 April. It is expected to end 24 hours later.

Met Éireann announced the news on their official Twitter page on Friday evening.

This warning will come into place at 7am on Saturday morning, and will end at 3am on Sunday morning.

popular
The 50 most iconic songs of all time* have been revealed
PICS: The man with the biggest penis in the world has one unbelievable problem with it
The JOE Movie Quiz: Week 97
People think they've figured out the ranking of the viewers on your Instagram Stories
Thunder Force review: somebody needs to stop letting Melissa McCarthy's husband make movies
Making A Murderer: The explosive and NSFW telephone call that implicates a new killer
Irish mobile network GoMo launches new €14.99 per month "for life" offer
You may also like
1 week ago
Met Éireann says temperatures could reach as high as 18 degrees this week
2 weeks ago
Met Éireann says snow will fall tomorrow night before a rainy weekend
4 weeks ago
Status Yellow rain warning for potential flooding issued for Donegal
1 month ago
Status orange wind warning for "damaging gusts" issued for Cork and Kerry
1 month ago
Met Éireann has issued a wind warning for the entire country
1 month ago
We're in for a chilly weekend as overnight temperatures to drop well below zero
Next Page