TIME Magazine have revealed their Person of the Year for 2018

In this instance, it's a number of people.

TIME Magazine are never ones to shy away from putting political messages on their front cover.

They have made their feelings on Donald Trump perfectly clear since he was elected in 2016, and have published a number of negative images of the politician in the past 12 months alone. 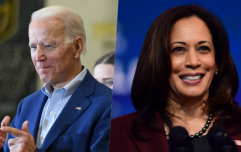 END_OF_DOCUMENT_TOKEN_TO_BE_REPLACED

And despite the fact that he has appeared on many of the front pages this year, he hasn't been made their Person of the Year this year.

The recipients of this year's Time Magazine Person of the Year is "The Guardians".

The Guardians refers to journalists who have acted extremely bravely throughout the year Jamal Khashoggi, the Capital Gazette, Maria Ressa, Wa Lone and Kyaw Soe Oo.

Jamal Khashoggi was a Saudi Arabian journalist who was brutally killed in Saudi Arabian consulate in Istanbul on 2 October 2018 by agents of the Saudi government.

Maria Ressa has reported from war zones in Southeast Asia for the past year, and Wa Lone and Kyaw Soe Oo are two Reuters journalists who investigated the massacre of ten Rohingya men and boys in a village in western Myanmar’s Rakhine state.

popular
The new film from the creators of South Park is going to get some big reactions
The JOE Movie Quiz: Week 137
Location of winning Lotto jackpot ticket worth €19.06 million confirmed
Put the pedal to the metal with this General Knowledge Quiz
That Nic Cage film everyone is talking about is finally available to watch at home
One of Ryan Gosling's best performances is among the movies on TV tonight
The JOE Friday Pub Quiz: Week 277
You may also like
3 years ago
TIME Magazine have sunk their teeth into Donald Trump yet again with their latest cover
3 years ago
Donald Trump, Kanye West and Rihanna among Time Magazine's 'most influential people on the Internet' list for 2018
3 years ago
Time Magazine's latest cover uses 958 drones to absolutely magical effect
3 years ago
Leo Varadkar named on TIME's 100 Most Influential People of 2018 list
4 years ago
TIME Magazine has revealed its Person of the Year
4 years ago
Trump's "Time Person Of The Year" tweet is getting absolutely annihilated by everyone on Twitter
Next Page