"The American people spoke very loud and clear when they elected this president."

There have been two major sexual harassment allegation cases opened up in US politics in recent weeks.

One involves the Republican Senate nominee in Alabama, Roy Moore. A teenage girl was the first to come forward with accusations of sexual assault, and since then several other woman have also claimed similar stories.

The other involves two-term Democratic senator Al Franken. He, too, has been accused of sexual assault, with photographic evidence surfacing of the incident.

Trump, who obviously seen the photos, tweeted about Franken's incident: 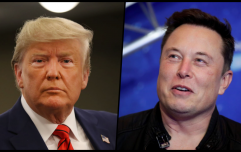 END_OF_DOCUMENT_TOKEN_TO_BE_REPLACED

However, Trump has remained quiet on the accusations levelled against fellow party member Moore.

In not too many words, Sanders responded simply: 'They admitted to wrong doing, the President hasn't.' END_OF_DOCUMENT_TOKEN_TO_BE_REPLACED

When asked why Trump weighed in on the Franken incident, but not the Moore incident, Sanders replied that the President did in fact let his thoughts be known on the issue while in Asia.

To be clear, the extent of Trump's statements on the Moore incident involved a quick answer claiming that it was too soon to speak on the matter.

Sanders was also asked if the President has sued these women whom he claims are lying about the sexual assaults and/or harassments, to which Sanders replied: 'I haven't asked him.'

popular
The JOE Friday Pub Quiz: Week 300 - the Triple Century
One of the most underrated sequels of all time is among the movies on TV tonight
A classic Western is among the movies on TV tonight
Rain and thunderstorm warning extended to include 15 counties
Met Éireann gives update on weather warnings for this weekend
New horror movie trailer has one of the best jump scares in years
QUIZ: Can you match all 32 counties up to their province?
You may also like
5 months ago
Joe Biden accuses Donald Trump of spreading "web of lies" about 2020 election
9 months ago
The US travel ban looks set to be lifted for vaccinated EU passengers
1 year ago
Donald Trump will not be allowed back on Facebook or Instagram
1 year ago
Donald Trump "100%" thinking of running for US President again in 2024
1 year ago
Donald Trump is reportedly creating his own social media platform
1 year ago
New footage from Capitol Hill riots shows rioters chanting "Hang Mike Pence"
Next Page