Video: A UL Student President wannabe has made a Wolf of Wall Street Parody and it’s absolutely brilliant

Would you vote for Tommy Bolger, the Wolf of UL Students' Union? After watching this, we would.

Anyone who’s ever been to college will know that the race for positions on the students union tend to be hotly contested and those who want to get elected have to pull out all the stops or, alternatively, engage in political chicanery of a manner that would make Frank Underwood (House of Cards) blush. 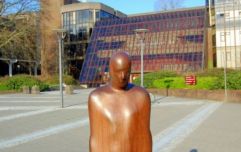 END_OF_DOCUMENT_TOKEN_TO_BE_REPLACED

Thankfully, University of Limerick Students' Union Presidential candidate Tommy Bolger has chosen the former option and starred in a campaign video brilliantly directed and edited by Michael Boyle of Actium Films and based on the antics of Jordan Belfort and his hedonistic friends in the recent Martin Scorcese classic, The Wolf of Wall Street.

We won’t spoil what occurs in the video and let you see it for yourself above, but needless to say, it’s absolutely hilarious and any video that includes a reference to the 1994 Castletown Donkey Derby (see below) always gets full marks in our book.