WATCH: Man scales down the side of a building as it catches fire

Wow. This is seriously impressive (and extremely dangerous).

A video has emerged of a man in Philadelphia, America, expertly scaling the side of a building to escape a fire that had started in an apartment block.

The fire department responded to an apartment fire, and when they got there, they saw a man climbing down the outside of the building to escape. 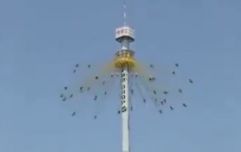 END_OF_DOCUMENT_TOKEN_TO_BE_REPLACED

Incredible video footage shows him grappling down the balconies and railings of several floors until he got to the ground level, where a number of nervous looking authorities jumped in to lend a hand.

Take a look at the video here:

We're sure we don't have to tell you this, but this was an emergency situation. Please don't try this at home.

According to CNN, the fire was believed to have been started by a trash compactor, and no injuries have been reported, as the building was quickly evacuated.

Tom Holland may have competition for the next couple of Spider-Man movies.

House of Rugby Ireland · Munster's nail-biting win, European games in doubt and Darren Cave interview
popular
The JOE Movie Quiz: Week 85
QUIZ: Can you name the Marvel Cinematic Universe film from just a single screen shot?
QUIZ: Can you pass your driving test and guess the meaning of all these road signs?
QUIZ: Name all the countries of the EU that contain 2 vowels or less
The JOE Friday Pub Quiz: Week 226
QUIZ: Can you correctly identify these European country flags?
QUIZ: Can you guess the drink from its can?
You may also like
1 year ago
Apostrophe Protection Society closes down, claiming "laziness has won"
1 year ago
25 of the funniest tweets you might have missed in October
1 year ago
WATCH: RTÉ raised their game with their Halloween reporting on Thursday
1 year ago
Comedian Josh Pray to stop making Irish-themed videos following online abuse
1 year ago
Four Irish entries in Cosmopolitan's top 30 most swiped Tinder accounts in Ireland and the UK
1 year ago
WATCH: American comedian Josh Pray is back with his reaction to All-Ireland final
Next Page