When they say "World Leaders", we all know who they're really talking about...

There had been a lot of discussion lately around Twitter's enforcing of their Terms Of Service when it came to tweets and Twitter users.

In 2017 alone, they had to explain why they removed Rose McGowan's account, but they also started making a stand against hate speech by banning some of the Britain First accounts.

END_OF_DOCUMENT_TOKEN_TO_BE_REPLACED

You know the one we mean.

The one that seems to routinely enjoy the idea of potentially kicking off a nuclear war with the leader of North Korea.

Well, the folks at Twitter finally addressed the issue on their blog, stating the following:

There’s been a lot of discussion about political figures and world leaders on Twitter, and we want to share our stance.

Twitter is here to serve and help advance the global, public conversation. Elected world leaders play a critical role in that conversation because of their outsized impact on our society.

Blocking a world leader from Twitter or removing their controversial Tweets, would hide important information people should be able to see and debate. It would also not silence that leader, but it would certainly hamper necessary discussion around their words and actions. 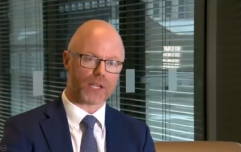 Stephen Donnelly responds to inquest into his lack of Twitter mentions

END_OF_DOCUMENT_TOKEN_TO_BE_REPLACED

We review Tweets by leaders within the political context that defines them, and enforce our rules accordingly. No one person's account drives Twitter’s growth, or influences these decisions. We work hard to remain unbiased with the public interest in mind.

We are working to make Twitter the best place to see and freely discuss everything that matters. We believe that’s the best way to help our society make progress.

If they delete the tweets or the tweeter talking about launching nuclear weapons, then the other people on Twitter wouldn't get to see the tweets and then tweet about those tweets.

popular
Met Éireann issues Status Yellow thunderstorm warning for 12 counties and 2 provinces
Meet the Irish man who’s selling all of his stuff and going to live in a tiny house on wheels
QUIZ: Is your General Knowledge up to scratch?
The JOE Music Quiz: Week 57
The JOE Movie Quiz: Week 102
The JOE Friday Pub Quiz: Week 243
QUIZ: Can you identify which of these countries have the colour white in their flag?
You may also like
1 week ago
Twitter to ask people to be nice and think before replying
1 month ago
Donald Trump is reportedly creating his own social media platform
2 months ago
Twitter to launch 'super follow' function that lets users charge for content
3 months ago
Bebo, the greatest social network of all time, is returning to save us
4 months ago
Twitter CEO Jack Dorsey explains why Trump is permanently banned
2 days ago
No new deaths related to Covid-19 reported in Ireland, 456 new cases
Next Page