The departing Donald Trump has seemingly indicated that he will run for the US Presidency again in 2024.

Trump is on his way out of the White House after losing the recent election to Joe Biden - but if reports are to be believed, it won't be the last you see of him.

END_OF_DOCUMENT_TOKEN_TO_BE_REPLACED

Although Trump has not formally conceded defeat to Biden (displaying all the grace and decorum of Jane from THAT Come Dine With Me episode), Trump is believed to be privately discussing his plans to run for election again in 2024.

These rumours look to be corroborated by footage from the White House Christmas party which took place on Tuesday.

According to Politico and the various US media to have reported on Trump's Christmas party, he said:

END_OF_DOCUMENT_TOKEN_TO_BE_REPLACED

In his speech, Trump again asserted unsubstantiated claims about the presidential election being rigged. None of these claims have been verified.

He is also believed to have dismissed any notion of Biden receiving credit for developing the Covid-19 vaccine, adding: "The vaccine was me". Pfizer-BioNTech would probably take issue with that.

Certain sections of the American media claim that Donald Trump is set to announce his intention of running for the presidency in 2024 on the same date of Joe Biden's inauguration - January 20th. 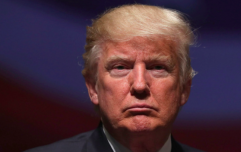 END_OF_DOCUMENT_TOKEN_TO_BE_REPLACED

In the wake of his election defeat, Trump called for various states to undergo a recount as he believed the postal ballot was fraudulent and illegitimate.

In states such as Wisconsin, a recount did go ahead - but Biden actually gained votes. Not quite the outcome Trump would have wanted.

popular
007 producers provide new update on Bond 26
Travis Barker rushed to hospital after tweeting "God save me"
Irish man dies following hit-and-run in London
Calls for €20 social welfare increase and minimum wage of €13 in new Budget
Amazon Prime Video has just quietly added 15 big movies to its library
The 100 best clubs in the world have been revealed
Flavoured vaping products could soon be banned in EU
You may also like
1 month ago
Donald Trump slams calls for US gun reforms following Texas school shooting
1 month ago
Elon Musk says he would reverse Donald Trump's Twitter ban
2 months ago
WATCH: Donald Trump storms out of Piers Morgan interview after branding him a fool
5 months ago
Joe Biden accuses Donald Trump of spreading "web of lies" about 2020 election
9 months ago
The US travel ban looks set to be lifted for vaccinated EU passengers
1 year ago
Donald Trump will not be allowed back on Facebook or Instagram
Next Page