“I did not have a happy childhood.” Tommy Tiernan speaks about growing up in Navan

Recent trips back to his hometown have been bittersweet for the popular comedian.

Tommy Tiernan has revealed how spending time in his hometown of Navan recently has made him realise that he did not have a happy childhood.

Tiernan is our guest on Ireland Unfiltered this week and during a conversation with host Dion Fanning, he discussed his memories of his upbringing in Navan.

END_OF_DOCUMENT_TOKEN_TO_BE_REPLACED

Tiernan has spent a lot of time in his hometown recently, his trips from Galway to Belfast prompting diversions into Navan, where he has taken to driving through the town at night and through the housing estates where he grew up.

While Tiernan says that his return to his hometown has brought back some great memories of his friends and of a Navan childhood, he says it has also provoked recollections of some less idyllic experiences.

Here’s how the conversation between host and guest proceeded.

Dion: And when you say tense what do you mean?

Tommy: Just full of anger and unresolved stuff and… do you know the feeling when you’ve walked into a room and people have just had an argument and they’ve stopped the argument but you can feel something? Well, our house was like that.

Dion: All the time?

Joe Brolly: "The DUP is about narrow self-interest"

END_OF_DOCUMENT_TOKEN_TO_BE_REPLACED

Tommy: Yeah, totally. So you’re aware of that… I had that feeling, I had a realisation and being able to name it, “I did not have a happy childhood”. But I was able to almost name it without feeling wounded by it or… laying the blame at anybody.

Tommy: Without feeling angry, without feeling, just kinda, ok… yeah. That was my experience, you know, without laying any great pressure on it, that was just the way it was, you know. And then I drove to Slane.

Dion: And you got angry again!

You can read Tommy's account of his regular phone conversations with President Michael D Higgins here and you can watch his full interview with Dion Fanning below. 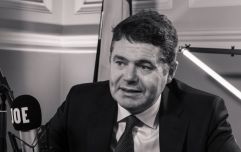 END_OF_DOCUMENT_TOKEN_TO_BE_REPLACED

You can listen to the eighth episode of Ireland Unfiltered in its entirety by simply clicking here and you can use #IrelandUnfiltered to join the conversation on social.

popular
The 50 most iconic songs of all time* have been revealed
Making A Murderer: The explosive and NSFW telephone call that implicates a new killer
Hank Azaria feels he needs to apologise "to every single Indian" for playing Apu in The Simpsons
Dr Ronan Glynn says six more weeks of strict restrictions needed to prevent fourth wave
Steven Avery's lawyer says nephew Bobby Dassey planted evidence in case
Dr Ronan Glynn says there will likely be no need for vaccine passports by June
Japan to release one million tonnes of contaminated Fukushima water into the sea
You may also like
1 year ago
COMPETITION: Win four tickets to Republic of Ireland v Denmark
1 year ago
'I was told Joanne Cantwell had lost confidence in my abilities as an analyst'
1 year ago
Here's how to get tickets to Ireland Unfiltered Live with Joe Brolly
1 year ago
Lisa Chambers: Mood towards Fianna Fáil has changed “completely” since 2011
1 year ago
SDLP Deputy Leader Nichola Mallon recounts her memorable first meeting with Boris Johnson
1 year ago
SDLP Deputy Leader Nichola Mallon outlines the frustration of the NI government shutdown
Next Page