It's not going to happen.

Floyd Mayweather says that a potential $100m fight with Conor McGregor is now off the table.

"I tried to make the fight happen but we [weren't] able to, so we must move on." Mayweather told FightHype.com. 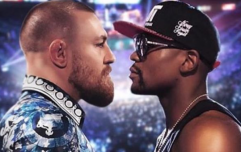 END_OF_DOCUMENT_TOKEN_TO_BE_REPLACED

"I feel honoured to be the biggest name in MMA and in boxing, and I don't even compete no more."

McGregor had said he wanted the fight but only if Mayweather could come up with the necessary purse to make it happen.

He is running around the Showtime offices, begging those executives to come up with the $100m cash he needs to fight me," the Irishman said last month. "As soon as he gets my money, we can fight."

With McGregor contracted to the UFC, any fight would have been subject to approval by the group.

popular
Two new 24-hour bus services are coming to Dublin
Power-ranking the House of the Dragon characters after THAT big fire
Jeffrey Dahmer’s dad thinks he knows what’s to blame for son becoming a serial killer
QUIZ: Test your knowledge with this Ultimate Friends Character Quiz
€600 energy credits and free schoolbooks for children set to be announced in Budget 2023
An underseen disaster film is among the movies on TV tonight
Gardaí in Mayo make arrest in investigation into the death of Joseph Deacy
You may also like
11 months ago
Wicklow GAA to investigate fight after Under 15 match on Saturday
4 years ago
Brawl during rush hour traffic on Dublin's M50 results in man being hospitalised
5 years ago
WATCH: How did McGregor V Mayweather turn into Racism V Homophobia?
6 years ago
VIDEO: Two NASCAR drivers became embroiled in a cringeworthy fight on TV
6 years ago
VIDEO: Footage shows Justin Bieber throwing a punch then getting thrown to the ground
7 years ago
Video: Premier League cult hero Paolo Wanchope gets in fist-fight with security at a match
Next Page