Gabby Logan is always a welcome presence on our TV screens and the former Welsh international gymnast had a busy summer presenting the BBC's coverage of the Rio Olympics and more.

You may know that Terry Yortah, Gabby's father, was a former Welsh international who spent the best part of a decade playing for Leeds, the city where Gabby was born. Having spent over 20 years in sports broadcasting, Logan was naturally a keen observer of Scotland's emphatic 5-1 win over Malta in their World Cup qualifying match.

END_OF_DOCUMENT_TOKEN_TO_BE_REPLACED

While Malta might be considered a 'smaller' nation in football terms, some people felt the need to point out their perceived 'minnow' status after this tweet was sent- despite the fact that Malta only lost 1-0 to both Italy and Croatia recently.

Logan was quick to remind her Twitter followers that England were also expected to beat a so called 'smaller' nation when they faced Iceland at Euro 2016. The broadcaster also made reference to the sizeable differences in population between England and Scotland - not that this argument really holds any merit in international football.

After opening this can of worms, plenty of people were quick to hurl abuse at the TV presenter. To her credit, she kept her composure and sent this response. 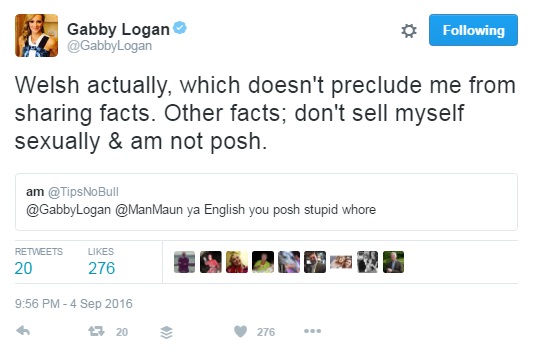 Despite Logan's best efforts to put the issue to rest, some people still wanted to chip away on the issue of her international allegiances. We think that she won this round. 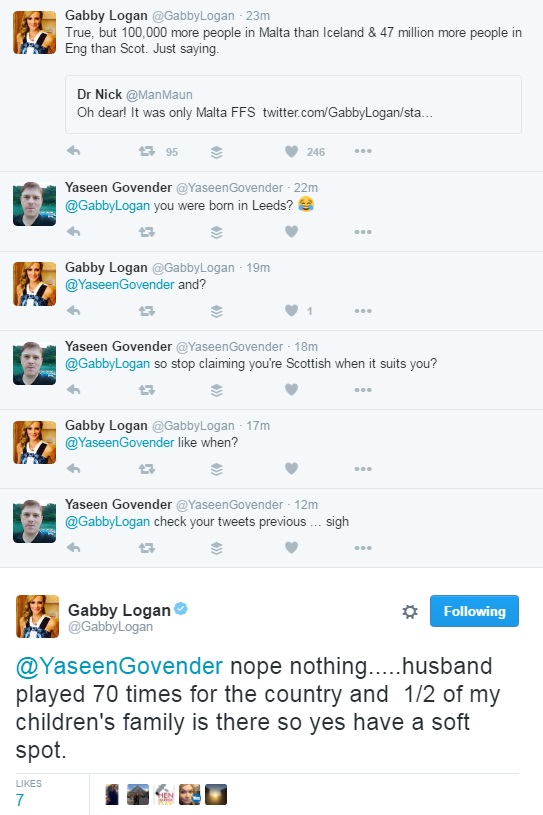 popular
WATCH: Storm Barra batters Irish coast in startling footage from lighthouse keeper in Cork
Woman killed in Clare crash named as Peggy Twomey, mother of Marty Morrissey
Amazon Prime Video has quietly added 8 big new movies to its library
These are the most generous counties in Ireland, according to GoFundMe
Pedestrian in his 40s dies after road crash in Tipperary
Ant & Dec call out Boris Johnson over Downing Street Christmas party
A fun action flick with Nicolas Cage is among the movies on TV tonight
You may also like
2 hours ago
Ant & Dec call out Boris Johnson over Downing Street Christmas party
2 days ago
Landscapers is the ultimate true-crime murder mystery show
2 days ago
This new rom-com about writing a Christmas #1 is absolutely going to make you cry (in a good way!)
4 days ago
10 must-watch shows and movies arriving on NOW this December
5 days ago
One of 2021's most overlooked movies and 7 more movies and shows to watch this week
5 days ago
COMPETITION: Just in time for Christmas, we've got a €200 One4All voucher to give away!
Next Page