Where have you been all our life.

Thousands of Irish rugby fans will flock to the Aviva Stadium on Saturday for Ireland's Six Nations meeting with France.

It's always a brilliant day out at a match there, but the one annoying part is the queuing for everything; food, pints and peeing.

However, queuing for two out of those three things could become a thing of the past thanks to an app called RapidQ.

The app won't help you get to the urinal first, but it will allow you to skip to the front of the line for beers and burgers. 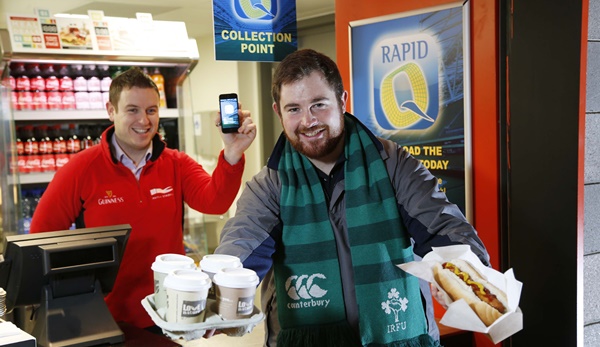 Here's how it works:

"Supporters simply need to download RapidQ from the app store on their phones and they can then start ordering their refreshments for collection before kick-off, at half time or after the final whistle.

"Once fans have downloaded RapidQ they pay for their order through their credit or debit card and then show staff at the pre-order collection point a code on their phone and walk away with their choices."

For anyone who has been hungry, thirsty and badly in need of a pee while stuck in a queue at Landsdowne Road, the app might be for you.

The Big Reviewski || JOE · The Big Reviewski with Y: The Last Man, that Malignant ending & a secret streaming service
popular
The 50 most iconic songs of all time* have been revealed
PICS: The man with the biggest penis in the world has one unbelievable problem with it
You could be shopping in an Aldi store with no checkouts in Ireland in the near future
"One person's rent is another person's income" – Varadkar rejects calls for three-year rent freeze
Almost 25 years on, one of the stars of Face/Off tells a personal Nic Cage story
Government announces special €1,860 payment for laid-off workers during pandemic
People think they've figured out the ranking of the viewers on your Instagram Stories
You may also like
3 years ago
Arsenal and Chelsea will play a friendly game in the Aviva this summer
3 years ago
Liverpool set to face Napoli in pre-season friendly at the Aviva Stadium this summer
4 years ago
WATCH: Aviva Stadium belts out a rendition of You'll Never Walk Alone that Anfield would be proud of
4 years ago
The following items will be banned from Robbie Williams' gig at the Aviva Stadium
4 years ago
CONFIRMED: Manchester United are coming to play at the Aviva Stadium in August
4 years ago
PIC: This supporter in the Aviva Stadium last night had no interest in watching the game
Next Page