Video: This GoPro footage of players in the tunnel before a college football game is pure class

As Kilkenny hurler Michael Fennelly once said, this would put the hairs standing on the back of your arse.

American Football is often ahead of the game compared to other sports in terms of fans being able to see what goes on behind the scenes and so it proved once again ahead of Texas A&M's clash with Lamar Cardinals at the weekend.

One Texas A&M player was fitted with a GoPro camera that captured footage of a group of very pumped up players in the tunnel before the game, with Kanye West's 'Power' providing a fitting soundtrack before the players emerged onto a packed out Kyle Field and a rapturous reception from over 104,000 supporters. 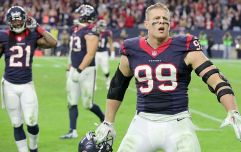 END_OF_DOCUMENT_TOKEN_TO_BE_REPLACED

In that sort of mood, it'll hardly surprise you to learn that they went on to win 73-3; needless to say, we want to see this in the GAA as soon as possible, maybe even in time for the All-Ireland hurling final replay in a little under three weeks' time.

House of Rugby Ireland · Quinn Roux on finding a home in Ireland and Mike McCarthy brings the absolute HEAT!
popular
The JOE Movie Quiz: Week 85
QUIZ: Name all the countries of the EU that contain 2 vowels or less
QUIZ: Can you name the Marvel Cinematic Universe film from just a single screen shot?
Recall of Pedigree dog food over safety concerns
The 50 most iconic songs of all time* have been revealed
QUIZ: Can you guess the drink from its can?
QUIZ: Can you correctly identify these European country flags?
You may also like
5 years ago
Video: Ultimate Frisbee player somehow pulls off impossible-looking catch
5 years ago
Video: Galway lad lands slick trampoline trick shot using an American football
5 years ago
Pic: A very funny mistake in this US newspaper headline should give you a laugh
5 years ago
Video: Irish people watch lacrosse for the first time and explain why it’s nothing like hurling
5 years ago
Pic: WWE’s Triple H plans to eat this mountain of food over 3 days
5 years ago
Video: College footballer performs 40-inch box jump while holding two 32kg dumbbells
Next Page