Attending the GamesCom event is quite unlike anything else on Earth

This is the Papal Visit of Gaming.

I love video games, but wouldn't say I was anywhere near the world's biggest gamer.

I'll argue that The Last Of Us should be considered a piece of modern art, but I'm also intimidated by online gamers who I know would kick my ass at PlayerUnknown BattleGrounds in milliseconds.

END_OF_DOCUMENT_TOKEN_TO_BE_REPLACED

Arriving at the Koelnmesse arena in Cologne, Germany, as a GamesCom virgin, it didn't seem all that impressive. A bit like arriving at the RDS, it was an incredibly huge hall, filled with video games and next-gen tech, but what was the big deal? And then it dawned on me... this was hall one... of eleven.

Some of the biggest conventions in the world often get talked about more, but the numbers don't lie:

E3 in Los Angeles took place in June, and there were a little under 70,000 in attendance.

END_OF_DOCUMENT_TOKEN_TO_BE_REPLACED

Taking place from Tuesday 21 to Saturday 25 August, GamesCom had in excess of 350,000 gamers within its halls. Nearly five times Croke Park at maximum capacity.

The day I arrived, it was only open to the press and exhibitors. Even at that, a sense of getting into a fairground to ride the rollercoasters the day before the park opens to everyone else, the halls were far from empty.

To get hands-on access to any of the games in the halls, there were queues, with the longest lasting over 40 minutes. Some smarties had the foresight to bring along foldable chairs so they wouldn't be left standing for the majority of the day.

For the press day, I was continuously warned: "Just wait until you see it tomorrow".

It was a constantly hummed hymn of foreboding, and once those doors opened to the public, the human flood turned inconvenient queueing up into a full-time job:

Part of the queue to gamescom. Gonna be huge! #gamescom #gamedev #awesome pic.twitter.com/FCtrlu7rHh

Three days of networking @gamescom 2018, now ready to tackle this crowd and check out all the new games 😲! #gamingindustry #gaming #gamescom https://t.co/mCNTOlifXF pic.twitter.com/R0rMbGl8ZG

Yep, those are queues in excess of six hours, just for players to get to play 10 to 20 minutes of a game a few months early. And sometimes not even that, as a lot of stands only showed footage of the game, not even playable versions.

If that alone doesn't truly hammer home the expanse, the devout passion, and the community love for gaming, then nothing else can.

Obviously, this huge market has gone beyond catching the attention of just games and tech, as this year saw Ford becoming the first motor company to launch a new car there, to tie in with the release of Forza Horizon 4.

Additionally, the Tom Clancy brand had two new games at the show - Rainbox Six Siege update Operation Grim Sky, and the blockbuster sequel to the record-breaking The Division - so there was also a fun lie detector building set up to promote the launch of Tom Clancy's Jack Ryan, which premieres on Amazon Prime in August.

The individual gaming areas themselves were hugely impressive, with a special shout-out to Marvel's Spider-Man for building a massive recreation of several blocks of Manhattan, in the middle of which players had dozens of screens and PS4s to try out the opening level (we've played the first few hours, and it is great fun).

On the opposite end, there was the futuristic looking set-up for Battlefield V, which had the players facing the hall, and a lighting set-up that was reminiscent of an Orwellian-themed Batman villain.

Some of the games on show were literally a few weeks away from release, with Destiny 2: Forsaken (Sept 4), Shadow Of The Tomb Raider (Sept 14), FIFA 19 (Sept 28), Assassin's Creed Odyssey (Oct 5), Call Of Duty: Black Ops 4 (Oct 12) all putting up huge stands at the show, and all absolutely packed out with hundreds of early accessors.

On the opposite end, there was Kingdom Hearts III (which arrives in January 2019, a full 14 years since KH2), while Cyberpunk 2077, which was initially announced way back in 2012, showed a 48-minute long demo to those attendance, but behind closed doors and was not far enough along to be given an actual release date (we're guessing it might even be a next-gen console release).

But in a world of YouTube, of social media, of constant online content that can keep people almost immediately updated with the latest games news and footage, why do hundreds of thousands of people each spend hundreds, if not thousands, of euros to attend GamesCom?

"These are important enough that I fly all over the world to do them," says Tim Willits, studio director of ID Software (Doom, Rage, Wolfenstein), when we sit down to talk to him behind the scenes in the Bethesda room.

"But it gives individuals, people who wait in line, a chance to play the game. It is for the people who absolutely love games."

"It is a big celebration, that's what it's about", says Loke Wallamo, senior game designer at Avalanche Studios (the Just Cause series, Mad Max), who points out the big differences between GamesCom and other gaming expos around the world.

"This is the big consumer fest, and it gives the perfect opportunity for people to get hands-on and close with the games as they're still being made or as they're coming out. I think that is very important for the gamers."

And that is something that definitely rings true.

While during the press day there were a few examples of cosplay gamers in attendance, that jumped up significantly during the open-to-the-public days, and while the queues to get into the gaming zones were Disneyland-esque, everyone was willing to do it.

I'm told that GamesCom brings a huge amount of money to the city of Cologne, as the surrounding area is effectively closed down and turned into its own little festival for several days, which music stages and pop-up venues scattered across the city.

Viral marketing campaigns are literally everywhere, from tiny stickers adorning every lampost for miles in every direction, to a huge blow-up Pip-Boy attached the roof of a petrol station to tie-in to the upcoming release of Fallout 76. 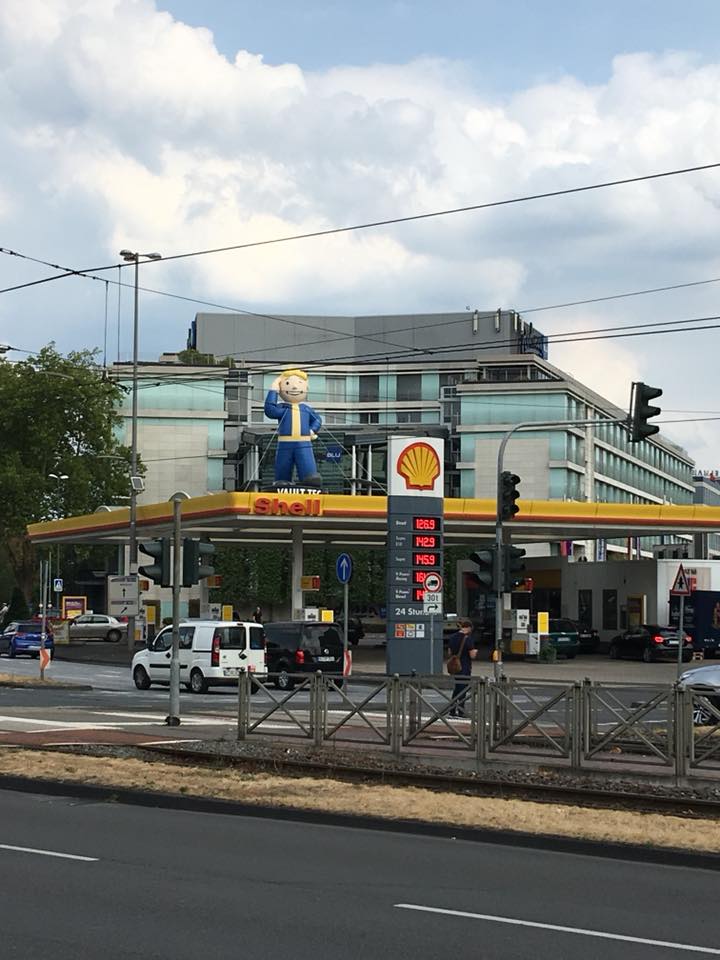 Not everything made sense, of course. Walking around all of the halls was a bit of a sensory overload, with the Las Vegas-esque casino lighting making sure you had no real sense of what time of day it was, and who exactly decided that gamers loved aggressive dubstep played at an almost assaultive level over everything?

And then there was the Fortnite area. It featured a zip-line, a bucking bronco in the shape of a rocket, a full-sized assault course... but what it didn't have was anyone playing the actual game. But then when you're as popular as Fortnite is, you don't need to make sense anymore.

Which kind of applies to GamesCom on the whole. It doesn't entirely make sense... to anyone who doesn't love games. Dan Greenawalt, creative director of the Forza racing gaming franchise, tells us that Microsoft's most recent study showed that there are over two billion gamers in the world. In 2018, not being a part of the gaming community almost makes you an outsider.

GamesCom is the ultimate altar for gamers, and it is a pilgrimage every games lover should make at least once.

The winners of the Best of GamesCom Awards are listed below:

popular
Netflix has just quietly added 12 big movies to its library
Gardaí deny asking Cork shop to stop selling Animal Bars
HSE urges public to stop using popular e-cigarette
Wagatha Christie: Rebekah Vardy storms out of court just 30 minutes into final day
The 50 most iconic songs of all time* have been revealed
Man dies after being struck by lorry in Tipperary
QUIZ: Can you name all the US States that contain 8 letters?
You may also like
2 months ago
Exoprimal has the greatest plot for any video game. Ever.
2 months ago
Elden Ring has the third-highest review score in the history of video games
4 months ago
16 of the most-anticipated games arriving in 2022
6 months ago
In conversation with Laura Bailey, one of the most famous performers in video game history
11 months ago
Taking a look at the seven huge games trailers that dropped this week
1 year ago
Returnal is either the best game or the worst game of 2021, depending on what type of gamer you are
Next Page