The unique reaction of different sets of fans is one of a number of new features in the latest edition of FIFA to be released later this year.

As a result, instead of the usual generic background noises gamers are used to hearing during the course of a match, crowds will now be designated by their club, league or region so you can expect to hear ‘You’ll Never Walk Alone’ when playing with Liverpool at Anfield, while fans at the City of Manchester Stadium will do the famed ‘Poznan’ celebration after a goal. 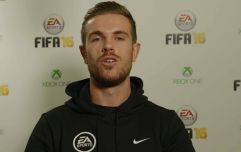 Video: Jordan Henderson appeals to JOE.ie readers to put him on the cover of FIFA 16

END_OF_DOCUMENT_TOKEN_TO_BE_REPLACED

We imagine that cries of ‘You can stick that yellow card up your a*** ref’ will be universal to all grounds replicated in the game, or grounds in English-speaking regions at least.

As well as that, there has been significant advances in the emotional intelligence of the players, with every one of the 22 players experiencing a feeling or attitude towards every other player on the pitch which evolves based on how the match plays out.

For example, if Lionel Messi is constantly being roughed up by say, Sergio Ramos, then he might square up to him for a bout of handbags, while players will encourage team-mates after an early miss, castigate them if those misses become a habit and all join in in the celebrations when one of their team-mates scores a last-minute winner.

The folks at EA seem to have their work cut out trying to make the latest version of FIFA a cut above their predecessors and from what we’ve seen so far, they seem to be doing a decent job of it too. We can't wait.

FIFA 15 will be released in Ireland on 27 September.