Maybe every red card has a silver lining…

An elderly man can thank a non-league referee for issuing a red card to goalkeeper Ben Scott, as without his intervention he may not have survived to tell the tale.

The Stocksbridge Park Steels goalkeeper was given an early bath at the weekend in the seventh tier of English football for a dangerous tackle during Saturday’s Northern Premier League match. But that was when the real action began.

According to the BBC, the 29 year-old goalkeeper was trudging off and subjected to a few wise cracks from the crowd when he noticed a girl running past.

“She said, ‘a gentleman's died’, so I followed her into the crowd and came across the gentleman on the floor and his heart was in an irregular rhythm,” he said. 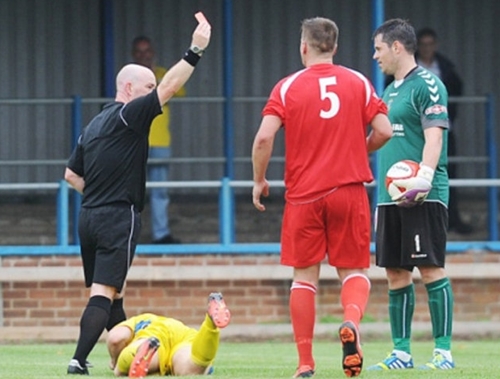 Scott gets his marching orders before his off-field heroics - pic credit: edp24.co.uk

Scott, who is a part-time footballer and full-time nurse, immediately leapt into action to help the stricken man in his 70s, and with the help of the St. John Ambulance crew was able to give the man a shock which put his heart into a normal rhythm. The man was then transported to nearby Norfolk hospital and is now recovering at home.

And as for the result of the match, Stocksbridge showed that they need their hero back between the sticks after conceding three goals in a high-scoring draw.

The greatest red card we are ever likely to see and a fantastic ending to what could have been a very sad story indeed.

popular
2022 looks like it will finally be Hollywood’s big coming out party
President Michael D. Higgins leads the Late Late line-up this week
QUIZ: Can you name all the US States that contain 8 letters?
Ryanair recruiting for over 100 positions at Dublin Airport
The spiritual successor to Roger Rabbit and 7 more movies and shows to watch this weekend
JOE Gaming Weekly - Ever wanted to see Batman fight Arya Stark?
You may also like
4 days ago
Conversations With Friends tackles sexuality the way Normal People tackled sex
1 week ago
Doctor Who: Sex Education star announced as new Time Lord
2 weeks ago
BBC announces brand new series from the creator of Peaky Blinders
1 month ago
WATCH: Downton Abbey star brilliantly blasts Boris Johnson on live TV
1 month ago
Richard Osman quits BBC's Pointless after 13 years of trivia gold
2 months ago
Tributes pour in for actress Lynda Baron, who has died aged 82
Next Page