Before it all tees off at Carton House tomorrow, JOE grabbed a quick chat with one of Irish golf’s brightest new stars, Alan Dunbar.

It has been a hell of a few months for Rathmore golfer Alan Dunbar. From playing the US Masters to turning pro, the 23-year-old is getting ready to play his home Open at Carton House this week.

Before he tees off, we managed to grab him for a quick chat.

JOE: So, how’s the form heading into this week?

Alan Dunbar: Yeah, it’s been good. Playing a few tournaments, making a couple of cuts so things have been going good.

JOE: And how is Carton House looking to you, does the course suit you?

AD: I’ve played the course a few times, the European Amateur was held here last year and the National Academy is based here so I’m familiar enough with it. The course is quite long so I’ll have to hit it and if you lay up from the bunkers you’re too far back so you've got to take them on.

JOE: This is your first Irish Open as a pro so tell us does it feel any different?

AD: As an amateur the tournament was all new to me. This year I feel a lot more comfortable and I know what I’m doing. At the start of the year it was all about settling in and I'm settled now so I'm just looking forward to getting out there tomorrow.

JOE: How have you found the transition to going pro? Is life on Tour not quite as glamorous as it seems?

AD: The key on Tour is knowing how to pass the time. If you’ve nothing to do it can be boring just sitting around in hotel rooms so you have to manage your time. As an amateur, you travel as a squad so it is different as a pro.

JOE: Of course your last amateur appearance was at the Masters. Tell us about that week.

AD: I had a great week, I was excited as not many people get the chance. Lots of pros play for years and never get a chance so to get there as an amateur was a great reward for winning the British Amateur title. I enjoyed it, I didn’t play bad but I struggled on the greens, as most first-timers do.

JOE: And are they as hard to read as everyone says?

AD: Yeah, I thought they were 10 times harder than I expected! 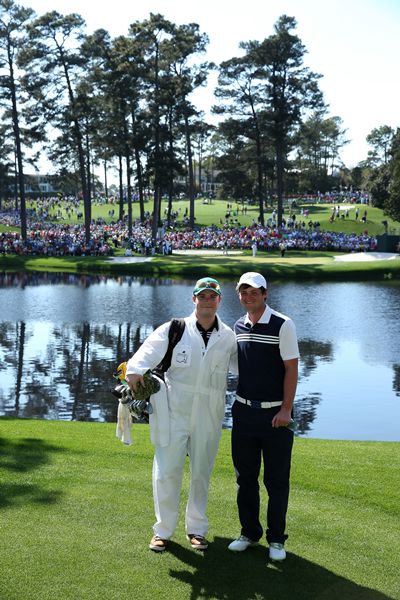 JOE: You played with a former winner at Augusta, Trevor Immelman. Did you learn a lot from him?

AD: Just from watching him you could tell that he had played around there quite a few times. He just hit the ball in the right place all day and he never looked like making a bogey. Me and George Coetzee (another Augusta debutant), well, you could tell it was our first time.

JOE: Was it everything you expected it to be?

AD: It was actually so much better than that. You just can’t describe it, it’s an unbelievable place. Just playing on the Sunday before with John Carr, before all the stands and stuff go in, and standing on the first tee looking over the entire course is very special.

JOE: By turning pro just after the Masters you forfeited your entry to the US Open at Merion. After watching the tournament, were you at least a little happy to miss out on the brutally tough course?

AD: Certainly the way the tournament played out, with the weather especially making it tough, yeah, I was happy enough with my decision. I’ve managed to get a lot of golf under my belt and a lot of experience by turning pro. If I had stayed amateur I would have missed out on an awful lot of golf.

JOE: And have you spoken to the lads who played Merion, how bad was it?

AD: Yeah, I spoke to Kevin Phelan (Irish amateur) and I told him how well he did. He told me that he shot +20 so it wasn’t that good (laughs). The best players in the world were shooting 20 over so he did really well. He made the cut and had a great week and I told him that.

JOE: As a man who knows that part of the world very well, do you reckon there is a serious chance for Portrush to host the British Open?

AD: It’s definitely capable. Portrush is twice the size Merion is. It definitely has the room, they proved that with the Irish Open last year. It’s a perfect venue for it.

JOE: And if you don’t take the glory yourself on Sunday, who’s your tip for success this week?

AD: Thomas Bjorn. He’s playing so well, he’s top five every week and he has a  great record at Carton House. He’s due a win so I’ll go for him.

JOE: Okay Alan we’ll let you go. Thanks for your time and good luck in the tournament.

popular
The JOE Movie Quiz: Week 102
Leo Varadkar says cyber attack on Department of Health was "unsuccessful"
Ryanair set to take first delivery of "Gamechanger" aircraft this month
The 50 most iconic songs of all time* have been revealed
International travel won't resume until August "at the earliest", says Leo Varadkar
QUIZ: Is your General Knowledge up to scratch?
The JOE Friday Pub Quiz: Week 243
You may also like
2 months ago
Fine Gael senator says golf and sea-swimming restrictions should be lifted
1 year ago
"Very chaotic" - Irishman describes being struck by lightning on US golf course
1 year ago
Irishman hospitalised after lightning strike on US golf course
1 year ago
Shane Lowry given a hero's welcome in his hometown of Clara, Co. Offaly
1 year ago
Gardaí release plan for Shane Lowry homecoming in Offaly this evening
1 year ago
WATCH: RTÉ's interview with Shane Lowry's granny is absolutely wonderful
Next Page