Pic: Is this one of the most ridiculous footballing tattoos of all-time?

One Chelsea fan will be making a second visit to the tattoo parlour after his ink work to pay homage to the 2012 Champions League success wasn’t fully complete.

The London side upset all the odds to land the European crown despite being under the cosh for long periods in both the semi-final and final and one Blues fan decided he wanted to celebrate the occasion with a tattoo on his back.

Nothing wrong with that of course, but unfortunately for the fan, his joy at the work of art was tempered somewhat by the fact it wasn’t fully complete. 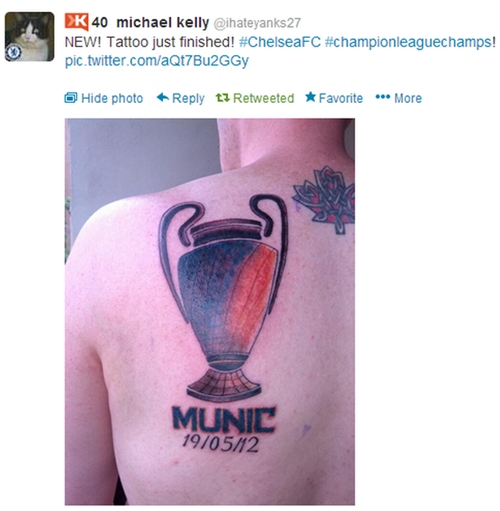 As any of you eagle-eyed readers will notice, Munich is missing the final letter in its name, something that the fan realised and suggested would be rectified today.

The tweets were removed from the account, so we can thank 101greatgoals for the screengrabs, and as of yet we have no update on whether the artwork has been edited.

popular
The JOE Friday Pub Quiz: Week 300 - the Triple Century
One of the most underrated sequels of all time is among the movies on TV tonight
A classic Western is among the movies on TV tonight
Rain and thunderstorm warning extended to include 15 counties
Met Éireann gives update on weather warnings for this weekend
New horror movie trailer has one of the best jump scares in years
QUIZ: Can you match all 32 counties up to their province?
You may also like
2 months ago
Roman Abramovich 'suffered suspected poisoning' following Russia-Ukraine peace talks
2 years ago
Here's how to get tickets to Coca-Cola's last Premier League roadshow
3 years ago
"Are you talking about a man who took a 6th place Derby from the Championship, to 6th place in the Championship?"
3 years ago
QUIZ: Name these former Liverpool and Chelsea players
3 years ago
The Football Spin on Maurizio Sarri's problems and have Chelsea handed Manchester City the title?
3 years ago
The Football Spin on the Rafa Benitez conundrum, Chelsea's chance for glory and how English football anticipated Brexit
Next Page