Pic: Squint and you'll just about make out this sidewalk ad for Portugal v Ireland in New Jersey

Is it McGeady or Ronaldo? You decide.

The FAI have tweeted this picture from New Jersey, where they've taken to spray-painting the pavements to get people inside the Metlife Stadium on June 10th.

The only problem is that they've used the palest blue possible, so it's pretty hard to make out whether the no.7 figure is that of Aiden McGeady or that Portuguese lad who plays for one of them aul' Spanish teams.

We're going with the former. 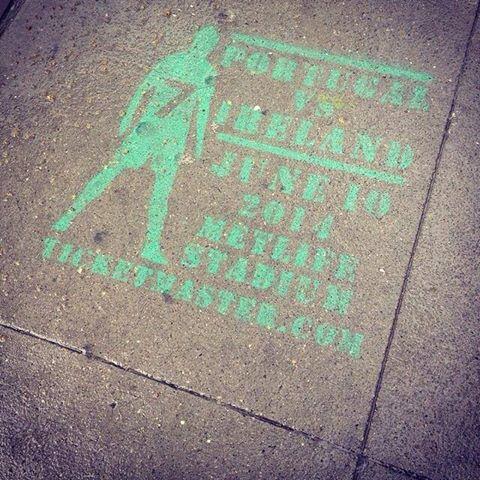 popular
Katherine Ryan says famous TV star is a ‘predator’ and everyone in industry knows
20 years ago, one of the best sci-fi movies of the 21st century was a box-office bomb
The JOE Friday Pub Quiz: Week 322
The JOE Movie Quiz: Week 181
QUIZ: Only the sharpest will get 100% in this General Knowledge test
QUIZ: JOE's Big News Of The Day Quiz #19
Angle grinder used to steal safe from security van in Dublin
You may also like
9 months ago
Viewers praise Tommy Tiernan Show for “incredible” interview with Jack Kavanagh
1 year ago
Portugal has made it illegal for your boss to text you after work hours
1 year ago
World's longest pedestrian suspension bridge opens in Portugal
3 years ago
An Irish man has died while holidaying in Portugal
4 years ago
Ryanair cabin crew in five countries plan to go ahead with strike action next week
4 years ago
Department of Foreign Affairs release important travel information for anyone holidaying in Portugal
Next Page