With Cork and Clare set to do battle in the coming Munster hurling semi-final, we take a look back at one of the most memorable games in recent times between the two rivals.

This match occurred in the unusual surroundings of Croke Park, but bristled with provincial intensity throughout and would go down as one yet another keenly contested clash between the two sides.

For Clare, it was a heart-breaking defeat in a game they seemed destined to win, while for the Rebels it was a narrow escape as they marched onto the final where they would put back-to-back Liam McCarthy successes.

Coming into the game Cork were red-hot favourites. They were undefeated since losing to Waterford the previous year and their running game was causing every team they faced huge problems. They landed the Munster title after wins over Waterford and Tipp, while Clare had re-grouped after losing to the Premier by two goals.

They enjoyed wins over Waterford, Offaly, Dublin and Wexford, but few gave them a real chance of upsetting John Allen’s side at the penultimate stage. 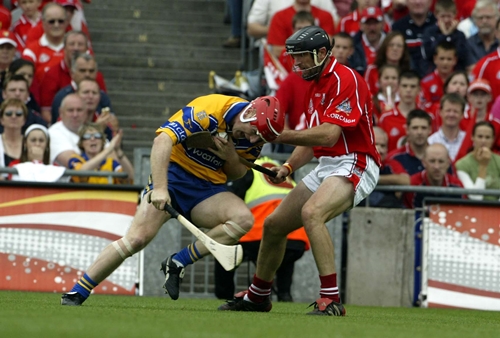 Two of the great hurlers battle it out

Ten years on from their breakthrough victory over Cork in that All-Ireland winning season, the Banner men showed they were not going to be overawed by the occasion.

By the half-time interval, Cork were lucky to be trailing by just two points, but at the start of the second half the Clare men hit a real purple patch. They hit four points unanswered points to leave the score at 0-13 to 0-07 as Tony Carmody, Tony Griffin and Niall Gilligan causing all sorts of bother to the much vaunted Cork rear-guard.

Cork responded by withdrawing their All-Star centre back Ronan Curran off and also introducing the talismanic Brian Corcoran and they helped drag the Rebels back into the contest.

The O’Connor brothers would be the tormentors in chief, with Jerry grabbing the dramatic late winner to break Clare hearts.

Here is  re-cap of those closing minutes of the epic encounter.

popular
Netflix has just quietly added 12 big movies to its library
Gardaí deny asking Cork shop to stop selling Animal Bars
HSE urges public to stop using popular e-cigarette
Wagatha Christie: Rebekah Vardy storms out of court just 30 minutes into final day
The 50 most iconic songs of all time* have been revealed
One of the greatest films of all time is among the movies on TV tonight
Viewers left emotional following Derry Girls finale special
You may also like
9 hours ago
Gardaí deny asking Cork shop to stop selling Animal Bars
2 days ago
Man in his 60s dies following road crash in Cork
1 week ago
Irish cocktail bar named as one of the best in Europe
3 weeks ago
Man arrested following armed robbery in Cork
4 weeks ago
Over 50km of new cycling and walking infrastructure proposed in €600 million transport plan for Cork
1 month ago
Status Yellow warning issued with heavy rain on the way
Next Page