They are working on their follow-up to the hugely popular Batman games.

Rocksteady Games have been pretty quiet since they released Arkham Knight in the summer of 2015, and ever since there have been some heavy rumours about what they'd be working on next.

First up was that they were going to be making a huge new Harry Potter video game, although the rumour was quickly squashed.

END_OF_DOCUMENT_TOKEN_TO_BE_REPLACED

Since then, there were strong beliefs that they'd moved over to Batman's former sparring partner, and would soon be delivering a new Superman game, which has been reported (via ComicBook.com) for a while now.

With the Game Awards set to take place this week (the six finalists for Game Of The Year can be found here), most people were expecting Rocksteady to debut the first teaser trailer for the new game... until the director of the company tweeted this...

Looking forward to #TheGameAwards this year! We’re still hard at work in our development bunker so don’t expect an announcement from @Rocksteadygames. When it’s ready to show, you’ll be the first to know. Spoiler: it’s not Superman 😳

Although now the rumour has expanded to it actually being an entire Justice League game, which would be... quite the undertaking.

One of the big connections is that all of these properties - Batman, Superman, Justice League, Harry Potter - are Warner Brothers properties, so it could be that they're doing something else within the WB umbrella. 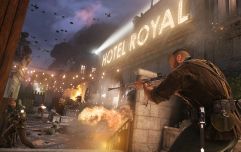 Call Of Duty: Vanguard is as close as we'll get to an Inglourious Basterds video game

END_OF_DOCUMENT_TOKEN_TO_BE_REPLACED

Which could mean anything from Mad Max, to Godzilla and/or King Kong, to Pacific Rim... the list goes on.

We won't know for a while yet anyways, but one thing we do know is that the Game Awards will be giving us our first look at a brand new Alien game.

popular
Gardaí warning people not to make unnecessary journeys in anticipation of Storm Barra
Man dies after being attacked by newly calved cow in Mayo
Carlow woman banned from keeping animals for life after starving dogs to death
This new rom-com about writing a Christmas #1 is absolutely going to make you cry (in a good way!)
A terrific crime thriller is among the movies on TV tonight
The JOE Movie Quiz: Week 131
"Danger to life" risk with Storm Barra "weather bomb", warns Met Éireann
You may also like
1 month ago
WATCH: The first 15 minutes of George R.R. Martin's video game are going to blow your mind
1 month ago
The Ultimate Mortal Kombat Quiz
1 month ago
Netflix to begin rolling out games on its mobile app this week
1 month ago
In conversation with Laura Bailey, one of the most famous performers in video game history
1 month ago
The first trailer for the Uncharted movie has finally arrived
1 month ago
10 scary games you can play right now (without having to actually buy them)
Next Page