Throughout the interview, Logan Paul says that he is no longer controversial, and that he is also the fastest man in the world.

YouTube sensation Logan Paul appeared on Fox News on Monday to speak about why he uploads his videos to YouTube instead of Facebook, and it is possibly one of the strangest six minute-videos we've ever seen.

The interview immediately takes a turn, as man with 19 million YouTube subscribers announced that he is "an ex-controversial" star, and that he is proudly no longer controversial. 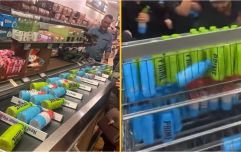 END_OF_DOCUMENT_TOKEN_TO_BE_REPLACED

He earned $14.5 million in 2018, but in the interview says that his expenses just passed his income for the first time, and that this terrifies him. "I think it's the beginning of the end," he said.

On top of that, he claimed that his podcast is the number one in the world, and that he is the fastest man in the world.

Finally, his advice for being a top YouTuber?

popular
Harvard study reveals how many times men should ejaculate each month to stay healthy
Colin Farrell shouldn't win the Oscar this year
Parents left in shock after gorillas start mating in front of kids at zoo
Annie Wersching, best known for role in TV series 24, dies aged 45
The JOE Friday Pub Quiz: Week 331
Forspoken breaks the golden rule of gaming... and not in a good way
S Club 7's Hannah Spearritt and children left homeless after being forced from home before Christmas
You may also like
5 months ago
Logan Paul pulled off a high-flying move that left fans stunned at Summerslam
3 years ago
Katie Taylor has absolutely no time for KSI and Logan Paul as they headline boxing event
4 years ago
Logan Paul criticised after revealing plans to "go gay" for a month
5 years ago
YouTube cuts ties with Logan Paul over ‘suicide forest’ video
5 years ago
YouTube finally responds to the Logan Paul controversy
5 years ago
COMMENT: Defending celebrity cult icons like Trump, McGregor and Logan Paul is a toxic cycle
Next Page