VIDEO: It has been a rollercoaster 24 hours for Ricky Gervais, who laments a lost hero

David Bowie was one of Ricky's heroes.

Ricky Gervais once again made all the headlines at the Golden Globes it his fourth stint at hosting. Nobody escaped his savage tongue, which made for another great show. But The Office creator, like the rest of the world, woke up to the tragic news of David Bowie's sudden passing this morning, and everything was put into perspective

Bowie was a genuine hero to many, and that very much included Gervais, who has since posted this brief but heartfelt tweet.

He also retweeted this...

Very sorry and sad to say it's true. I'll be offline for a while. Love to all. pic.twitter.com/Kh2fq3tf9m 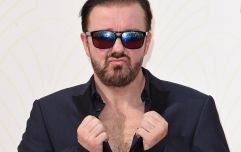 PICS: Ricky Gervais loves Dublin and the feeling is most definitely mutual

END_OF_DOCUMENT_TOKEN_TO_BE_REPLACED

The iconic singer's untimely death will undoubtedly have a personal impact on Gervais, who so famously had Bowie guest star in his brilliant series, Extras.

For those of you who haven't seen this, Bowie appeared as a warped version of himself in the hit show and made up a song on the spot in front of an enthusiastic crowd which took the almighty piss out of Gervais' character, Andy Millman. It was hilarious.

Extras co-creator and co-star also paid tribute to the legendary rock star, fondly remembering their time together on the show.

Honoured to have known him, if only for an afternoon. RIP Mr Bowie https://t.co/wnf9HW2eIB

Here's a fantastic clip of Bowie (still in character from Extras) talking about his influence over Gervais' comedy acumen, in a video which demonstrates that Bowie actually had spot on comic timing to match his unique musical talent.

And here's the audio of the unforgettable cameo.

popular
Amazon Prime Video has just added 21 big movies to its library
The Last Of Us Episode Five will premiere days earlier in Ireland and UK
Shock as blues singer beats Adele, Beyonce and Taylor Swift to win Song of the Year Grammy
5 years ago, Hollywood took a massive gamble on a huge sequel... and lost big time
One of the best crime thrillers ever is among the movies on TV tonight
Ben Affleck's bored expression at the Grammys becomes a meme
One of the most underrated crime thrillers of recent years is among the movies on TV tonight
You may also like
3 months ago
James Corden responds to accusations he copied a Ricky Gervais joke
3 months ago
Ricky Gervais calls out James Corden for copying one of his jokes word for word
8 months ago
Ricky Gervais responds to accusations of transphobia following new Netflix special
8 months ago
"Hateful" and "transphobic" - Ricky Gervais criticised over jokes in new Netflix comedy special
1 year ago
Get ready to laugh and cry with the final season of After Life
1 year ago
HBO reportedly paid James Gandolfini $3 million to NOT replace Steve Carrell in The Office
Next Page