We've got great news for fans of Subway sandwiches

From now on, when they say ‘footlong’ they’ll really mean it.

A couple of years back, Subway, the massive worldwide sandwich chain, came under fire when a picture featuring one of their famous footlong subs went viral and resulted in some unwanted bad press.

The photo included a footlong sub beside a measuring tape, which clearly showed that the sandwich in question was noticeably shorter than a foot in length, resulting in a class action lawsuit from angry and possibly even hangry Subway customers. 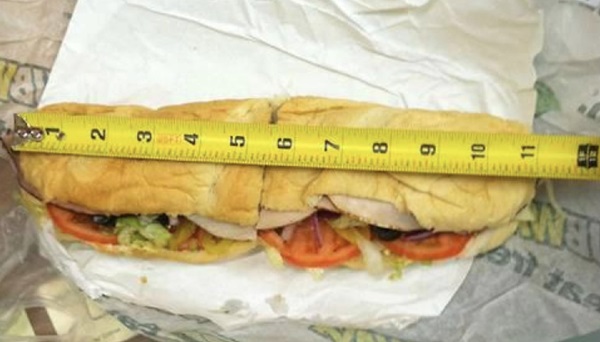 END_OF_DOCUMENT_TOKEN_TO_BE_REPLACED

Now, according to Business Insider, Subway will now require the subs in all of their franchises to measure the required six and 12 inches in length, ensuring no more frustrated customers and more importantly from Subway’s point of view, no more lawsuits.

Subway have agreed to carry out compliance inspections to ensure that the new conditions are being adhered to and their protocols will no longer allow “for a small tolerance in the size of a footlong sandwich” as had previously been the case.

Anyone else hungry all of a sudden?

House of Rugby Ireland · Ireland's feel-good win, Casey's initiation song, scrapping Sexton and Scott Williams interview
popular
Eoghan McDermott to leave RTÉ after six years (Report)
€17,500 worth of cocaine found at street party in Limerick
One man has been charged following Limerick street party, 50 FPNs issued
Sony are giving away a free game to all PS4 and PS5 owners
NUIG students told to write 2,000 word essay for breaching Covid rules
Someone in Ireland is €500,000 richer following Tuesday's EuroMillions draw
Zero Covid would mean restrictions until November and 2km return, says Donnelly
You may also like
1 year ago
The world's best cocktail bar is coming to Cork for one night only
2 years ago
Fanta Lemon fans rejoice, it's here to stay in Ireland
2 years ago
Donegal nightclub's new 'Bomb in a Bag' drink proves big hit at Donegal rally
2 years ago
Ed Sheeran fans will be able to order take-away while queuing for his gigs in Phoenix Park
2 years ago
Deliveroo are now delivering grub to public parks across Ireland
2 years ago
Coca-Cola is launching its first ever slushie
Next Page