Taoiseach to open €400 million stretch of motorway in Wexford today

The extension has been under construction for four years.

After four years of construction, this extension means there is now a full motorway/dual carriage way system in place from Dublin to Enniscorthy. 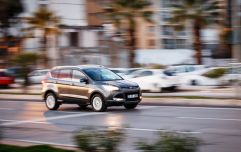 END_OF_DOCUMENT_TOKEN_TO_BE_REPLACED

This allows up to 6,000 drivers per day to bypass the town centre of Enniscorthy entirely, which will alleviate traffic congestion in the area significantly.

The route of the M11 Gorey to Enniscorthy is to the east of Enniscorthy, extending from the southern end of the Gorey Bypass at Clogh to a new junction at Scurlocksbush, approximately 1.5km to the north of Oilgate.

This section of the scheme will consist of 27km of new motorway.

The scheme also includes 8km of new single carriageway, to the west of Enniscorthy, linking from the existing Scarawalsh Roundabout to Templescoby on the N30.

In addition, a further 4km of new dual carriageway will link those two sections. This link will commence at a new grade separated junction at Ballydawmore and extend across the Slaney Valley to the Scarawalsh Junction.

The Big Reviewski || JOE · Shane MacGowan snarls & stars in this new documentary from Julien Temple
popular
The JOE Movie Quiz: Week 80
The JOE Music Quiz: Week 36
The JOE Friday Pub Quiz: Week 220
Harry Styles hits back at critics who told him to be more 'manly'
9 weird and wonderful Irish Christmas traditions we absolutely love
Status Yellow snow warning issued for five counties
The 50 most iconic songs of all time* have been revealed
You may also like
2 weeks ago
An Garda Síochána launches host of new Garda vehicles
1 month ago
Motor insurance premiums rise in Ireland despite fall in claims
1 month ago
RSA urges non-essential workers to cancel driving tests
1 month ago
Government gives go-ahead to €215 million upgrade of Dunkettle Interchange in Cork
3 months ago
QUIZ: Can you guess the meanings of all these dash symbols from your car?
3 months ago
Driver clocked doing 203 km/h amongst multiple road offences over Bank Holiday weekend
Next Page