As you may or may not know, we're big fans of Friday Night Lights here at JOE.

From the 15 life lessons we've learned from Tim Riggins, or our fantasy of what it might be like if the Friday Night Lights team were involved in an actual Super Bowl, or our power ranking of the best episodes of the show, if there's one thing we love to talk about, it is Friday Night Lights. 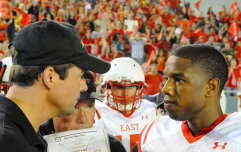 END_OF_DOCUMENT_TOKEN_TO_BE_REPLACED

So any time Tim Riggins - or Taylor Kitsch, to the real world - talks about the show and his potential future involvement, it immediately gets our attention.

Which is why it breaks our hearts a little bit that we have to inform you that it looks like that reunion is NEVER going to happen.

Rigg- sorry, Kitsch talked to The Daily Beast on the press tour for his new movie American Assassin, and obviously Friday Night Lights came up in conversation:

"I think there are still rumblings about that. Pete [Berg] knows the answer loud and clear. We’re having dinner tonight, and even at dinner, I think he would more or less joke about it than ever be like, ‘Hey, let’s go back ten years and relive this moment that ended perfectly.’ You know, there’s just no point.” 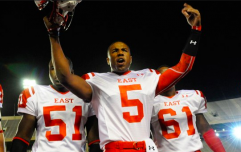 END_OF_DOCUMENT_TOKEN_TO_BE_REPLACED

Peter Berg was the executive producer of Friday Night Lights, so if there was anyone who has going to convince Kitsch to change his mind, it would be him.

They even reunited on the big screen a few times, when Berg directed alien-invasion epic Battleship and intense war story Lone Survivor.

But it does sound like Kitsch has very much made up his mind, so maybe we should all just continue to focus all of our energies on that Friends reunion instead...