It's the biggest Late Late Show in some time, kind of.

It's that deeply exciting time of the week again when the national broadcaster unveils the list of personnel set to grace your television screen on Friday night.

But of course, it's Late Late Show line-up reveal time. 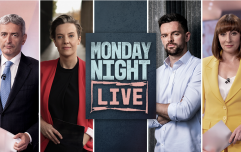 END_OF_DOCUMENT_TOKEN_TO_BE_REPLACED

Ryan Tubridy will be back, as ever, to bring the usual mix of chat, topical issues and music.

As for who will be joining him? Well, read on...

The first notable guest is unique enough – the Irish public.

Friday's edition will present the largest in-studio audience in almost two years, following the scrapping of the majority of Covid-related restrictions across the country.

END_OF_DOCUMENT_TOKEN_TO_BE_REPLACED

The audience will be made up of "people from all walks of life" including rugby fans – first-billed, for some reason – frontline workers, teachers, hairdressers and more from all corners of Ireland.

Speaking of rugby, Grand Slam winners Jamie Heaslip, Peter Stringer and Fiona Coghlan will shine a light on Ireland's prospects when it comes to this year's Six Nations campaign.

Elsewhere in sport, Kildare GAA All-Star footballer Mary Hulgraine will discuss how she kicked her addiction to oxycontin and alcohol to make a return to the senior women's team.

14-year-old harpist Úna Walsh, one of the stars of last year's Toy Show, will appear alongside her mother Barbara, sharing her extraordinary story about living with her hearing impairment and the impact of new technology on her life.

Walsh will also perform for the audience.

That's not all on the music front – rapper Maverick Sabre will play a cut from his new album.

popular
The "eighth best movie ever made" is among the movies on TV tonight
Mia Khalifa claims seaside town is better than Miami
Jennifer Lawrence sparks controversy by saying she was the first woman to lead an action movie
Met Éireann updates weather warning for entire country as temperatures set to fall to -6
The 50 most iconic songs of all time* have been revealed
QUIZ: JOE’s Big News Of The Day Quiz #27
The start of the superhero takeover of Hollywood is among the movies on TV tonight
You may also like
1 month ago
Taoiseach says he "got it wrong" about unaired Shane Ross interview
2 months ago
Worst crash in Irish aviation history to feature in new RTÉ documentary
4 months ago
RTÉ tries to solve Michael Collins murder in new documentary
5 months ago
Body of a man found on RTÉ campus in Dublin
5 months ago
RTÉ says it's "disappointed" with termination of partnership with Dublin Pride
5 days ago
Fans of Netflix's 1899 may want to check out this new mystery series
Next Page