The lineup for Friday night's Late Late Show is here

The lineup for the first Late Late Show of 2020 is here.

Here's hoping it's going to be a good'un.

This Friday night marks the first Late Late Show of the new year, and with so many people attempting to do a Dry January, we imagine quite a few people will be staying on their couch.

And if you are, you'll probably end up watching The Late Late Show at some point. Here's who is on the show this week:

Former President Mary McAleese will discuss adjusting to life as a civilian after the presidency, taking on the Catholic church, and give her views regarding Brexit and its potential impact on Northern Ireland.

Room to Improve host Dermot Bannon will be on to reveal the trials and tribulations involved in overseeing an extensive renovation to his own home. 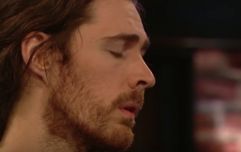 END_OF_DOCUMENT_TOKEN_TO_BE_REPLACED

Then it's singer Nathan Carter, who celebrates 10 years in Ireland this month, will give a special musical performance alongside The High Kings.

Actress Miriam Margoyles will be in the studio to discuss her prolific career on stage and screen.

Kathleen Keyes from Bray made headlines in December when she penned a letter to The Irish Times marking the anniversary of the death of her last surviving child, sparking an outpouring of sympathy from around Ireland. She will join Ryan tomorrow evening to tell her remarkable story and discuss how she copes with the loss of her three children.

The Late Late Show will kick off at 9.35pm on RTÉ One.


popular
“Chockablock” traffic on N11 prompts renewed appeals to public to avoid Easter weekend travel
Tesco make changes to their delivery system to favour elderly and in need customers
Someone in Ireland is €311,413 richer after Wednesday's Lotto draw
Here's Week 27 of JOE's 19 in 90 quickfire quiz
Rodent infestation amongst reasons for six enforcement orders for Irish food businesses in March
This Irish raffle is giving you the chance to win a €250,000 Ferrari
Google announces Stadia Pro is now available free for two months
You may also like
1 week ago
Ryan Tubridy has tested positive for Covid-19
2 weeks ago
The country needed a lift and Billy and Lanlih Holland provided it on Friday night
2 weeks ago
Here's the line-up for this week's episode of The Late Late Show
3 weeks ago
"Be a good citizen and do it for Ireland" - Ryan Tubridy gives inspirational speech on Late Late Show
4 weeks ago
The Late Late Show cancels live Limerick show due to coronavirus fears
1 month ago
Here's the line-up for this week's Late Late Show
Next Page