Some great choices here from the documentary king. Get them done.

When it comes to film recommendations, every single film fan has a few solid picks but some opinions carry more weight than others. When it comes to the documentary genre, it's arguable that only David Attenborough is more beloved than Louis Theroux.

From UFOs to death row inmates, there isn't a subject in the world that seems too taboo, weighty, or heartbreaking for Theroux to examine.

With a new book that's set to be published - Gotta Get Theroux This - the broadcaster discussed some of the documentaries that really made an impression on him.

Here are the film documentaries that Theroux recommends the most.

Plot: A documentary which argues that Randall Harris was wrongly convicted of the murder of Dallas police officer Robert Wood by corrupt system of justice.

What Theroux said: "An amazing landmark feature. It's an extraordinary piece of work, a forensic and beautifully-shot series of interview with various protagonists. It has a strong social justice element and the way in which the truth is revealed, is extraordinary. It's a great example of how powerful the truth comes across when it isn't forced. You, the viewer, put the pieces together and arrive at the truth.

2) Dear Zachary: A Letter To His Son About His Father

END_OF_DOCUMENT_TOKEN_TO_BE_REPLACED

Plot: Dear Zachary: A Letter to a Son About His Father is a uniquely intense and personal documentary about the murder of Kurt’s oldest friend and the unbelievable legal and emotional madness that ensued.

What Theroux said: "I'm reluctant to say too much about it. It's a heart-rending piece of work. No one I've ever recommended this too has failed to be profoundly moved by it. It's about bereavement, loss, family. It's just a wonderful film."

3) Exit Through the Gift Shop

Plot: The first film by renowned graffiti artist Banksy, the film tells the incredible true story of how an eccentric French shop keeper turned documentary maker attempted to locate and befriend Banksy, only to have the artist turn the camera back on its owner – with spectacular results.

What Theroux said: "It's not really about Banksy, it's about the nature of art and merchandising. I think it's a great example of a documentary in which one of the contributors to the film, sort of takes over and takes the story in a completely unexpected direction. For me, that's documentary nirvana. It manages to be light and funny in one way, but in others, it's a thoughtful piece of work."

4) The Act of Killing 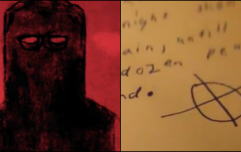 END_OF_DOCUMENT_TOKEN_TO_BE_REPLACED

What Theroux said: "The amazing, brilliant, and revolutionary storytelling device that the director uses on this is that he gets to know the men responsible for these killings. They're viewed as national heroes, but there has never been a full account of the bloodshed. The director invites the main killers to take part in the film and reenact their crimes. You get a sense that one of the killers is starting to see his crimes in a different way. In a strange way, there's a very humanistic value at the heart of it.

5) The Jinx: The Life and Deaths of Robert Durst

Plot: The six-part documentary from Andrew Jarecki and Marc Smerling features interviews with New York City real estate heir Robert Durst, who was suspected (and acquitted in one case) of three murders.

What Theroux said: "It's got that feeling of the story being ongoing while it's being filmed. It sort of becomes a tango between the director and Robert Durst as they figure out the nature of their relationship. It explores the director's own increasing unease as they make the film together."


popular
The JOE Friday Pub Quiz: Week 180
QUIZ: Do you know your dashboard warning signs?
Storm Jorge: Status red warning issued for Galway and Clare, two new weather warnings issued for 19 counties
QUIZ: Can you guess the pixelated album cover?
Met Éireann issues status red marine warning ahead of the arrival of Storm Jorge this weekend
The line-up for this week's Late Late Show is here
Here are the 11 best movies on TV this Friday
You may also like
4 days ago
Gangs of London cast discuss the new explosive gangster drama from director of The Raid films
5 days ago
Narcos star really wants to spend some time in Cork on his next visit to Ireland
6 days ago
QUIZ: How many of these Derry Girls characters can you name?
6 days ago
Brendan Gleeson's upcoming performance as Donald Trump is 'scary' and 'too close for comfort'
1 week ago
Season 2 of The Witcher is now in production as Game of Thrones' Tormund joins the cast
1 week ago
Narcos star would love to return for another season of the show
Next Page