While Disney have actively been dipping into their back catalogue for remakes in recent years - The Jungle Book, The Lion King, Dumbo, Aladdin etc. - the smart money would be on the Mouse House escalating this process over the coming years.

Case in point, Lady and the Tramp.

In the new Disney+ take on the beloved animation, audiences will be treated to a timeless re-telling of the 1955 animated classic.

For those unaware, the story revolves around a pampered house dog and a tough but lovable stray who embark on an unexpected adventure and, despite their differences, grow closer and come to understand the value of home.

In comparison to the first trailer, the latest footage goes very heavy on the animals as we see dogs stealing food, dogs having the chats, dogs being disobedient, dogs going off on an adventure, and, of course, dogs sharing one of the most famous meals in cinematic history. 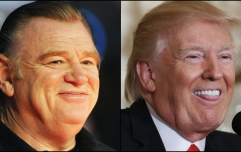 END_OF_DOCUMENT_TOKEN_TO_BE_REPLACED

The remake is available to watch in the US when Disney+ launches on 12 November.

As for Irish audiences, we're certain that it will be available on the platform when Disney + is launched in Ireland.


popular
QUIZ: Can you name the Sega Mega Drive game from the screenshot?
QUIZ: How many of these Derry Girls characters can you name?
Brendan Gleeson's upcoming performance as Donald Trump is 'scary' and 'too close for comfort'
The JOE Friday Pub Quiz: Week 179
Met Éireann predicting snow this weekend and well into next week
Britain's "iconic" post-Brexit passport unveiled, actually manufactured in Poland
A very good dog has been voted honorary mayor of a town in Colorado
You may also like
7 hours ago
QUIZ: How many of these Derry Girls characters can you name?
1 day ago
Season 2 of The Witcher is now in production as Game of Thrones' Tormund joins the cast
1 day ago
Narcos star would love to return for another season of the show
2 days ago
Roy Keane will be appearing on this week's Late Late Show
2 days ago
Here are all the best new titles coming to Netflix in March
3 days ago
Derry Girls star thinks the show might end after Season 3
Next Page