Some of the biggest movies and TV shows are making something of a comeback.

On Wednesday night, Paramount revealed that they would be launching their own streaming service, titled Paramount Plus.

It is a rebrand of the currently existing CBS All Access, but tied in to the announcement was a host of new titles, many of them based on pre-existing movies and TV shows. 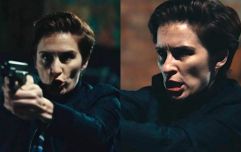 END_OF_DOCUMENT_TOKEN_TO_BE_REPLACED

While Paramount Plus is due to launch in the States very soon, there is currently no set release date on the side of the Atlantic.

Until we get that news, here are all of the remakes, reboots, sequels, and spin-offs we have to look forward to. This isn't the full list, just the cherry-picked ones that got our attention immediately:

Not the big alien movie, the animated show, based on The Last Airbender and The Legend of Korra. And a whole universe of spin-offs and big-screen movies are apparently all in the works.

Ahead of the new season, the animated MTV show is also getting a feature-length movie, which will be the franchise's second, after 1996's Beavis & Butthead Do America.

The hit animated show is getting a live-action reboot. If it is as good as the underrated 2019 movie, then we'll be on to a winner.

A live-action series version of the animated Nickelodeon show, which initially ran from 2001 to 2017.

One of the writers of Mad Men is behind this TV reboot, set in the modern day, telling the story of a young woman trying to make it in the world of ballet.

Kelsey Grammer is officially back as Dr. Frasier Crane, although none of the other cast members have been confirmed to return.

Grease: The Rise of the Pink Ladies

The series will take place before the events of the Grease, which will focus on Frenchy's older sister Jane, and how she founded the Pink Ladies.

Picking up 10 years after the show, we'll see how Carly, Freddie, and Spencer are getting on with their lives today.

The grandson of Charlie Croker (either Michael Caine, or Mark Wahlberg, depending on which version you've watched) receives his safety deposit box, it reignites the search for the gold bullion in this new TV series.

The first ever SpongeBob spin-off, this will show us how SpongeBob and Patrick and all the rest of the Bikini Bottom first met at summer camp.

Considered to be one of the most romantic movies of all time, the 1970 awards magnet is getting a TV makeover from the folks behind Gossip Girl and The O.C.

The Man Who Fell To Earth

David Bowie played the titular character in the 1976 movie, but Chiwetel Ejifor (12 Years A Slave, Doctor Strange) will take on the role of the alien who arrives on Earth during a turning point for mankind in the new TV adaptation.

A mini-series which will tell the story of famed Hollywood producer Al Ruddy's experiences with making the iconic cinematic masterpiece The Godfather.

The brilliant 1974 Warren Beatty-starring conspiracy thriller is getting a modern day TV adaptation.

A new movie based on the hit found-footage horror franchise is on the way, with the director of Underwater and the writer of Happy Death Day behind the scenes.

An origins story on the haunted graveyard story by Stephen King is in the works, with the writer of the 2019 big screen adaptation also working on this new movie.

The original voice cast are all set to return for this CGI version of the hit animated show.

The first ever kids-friendly spin-off of Star Trek will focus on the younger, brilliant members of Star Fleet.

A spin-off show from Star Trek: Discovery, focusing on the years that Christopher Pike was captain of the Enterprise, with a younger Spock at the centre of the new drama.

Having already got the six seasons, the telemarketing-based sit-com is now getting a movie.