Ryan Reynolds is in incredible shape ahead of Deadpool 2

Here's how Deadpool gets ripped.

He's come a long way since grabbing our attention in Two Guys and a Girl but a large part of the reason why the entire world absolutely loves Ryan Reynolds - aside from his brilliance on Twitter and skill as an actor - is that he always appears  like a really normal guy.

This being said, there are some perks that come with being the 'Merc with a Mouth' and it appears that a personal trainer is one of them.

END_OF_DOCUMENT_TOKEN_TO_BE_REPLACED

Granted, film fans have already seen Reynolds bulking up for his role in Blade: Trinity, but for the most part, we rarely saw excessive displays of  power, strength and athleticism in the superb Deadpool.

After all, that red suit doesn't just hide blood but the majority of Deadpool's torso.

With the sequel already filming, we've already seen the incredible lengths that Josh Brolin (Cable) is going to in order to nail the physicality of the character, but it appears that Reynolds is also amping up the workload at the gym.

Speaking with Men's Health, the star of Just Friends and Safe House revealed that his new physique is due to a training regime that was implemented by his personal trainer for the last eight years, Don Saladino.

"Don has programs that I can access online because when I'm shooting, my hours are so erratic. I don't want to have to meet somebody at 4 in the morning in a dark gym. I just want to go when I can go. When you plan your travels, plan your workouts as well," he says.

If you like, you can see some of the workouts that Reynolds uses via Don's Instagram page - we've also included some drills below. 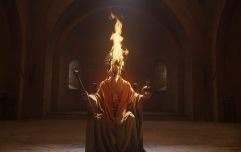 END_OF_DOCUMENT_TOKEN_TO_BE_REPLACED

When he's bulking for a role, the star of the upcoming The Hitman's Bodyguard says that he  eats "clean, whole foods" every two or three hours but he does have one weakness, pizza.

As for Deadpool 2, if this snap of Reynolds is anything to go by, we're expecting things to get a lot more physical.

T.J. Miller promised that the Deadpool sequel is going to have more laughs than the original, but we're also expecting more action.

Here's an example of the training drills that Reynolds would use.

The Big Reviewski || JOE · The Big Reviewski with Y: The Last Man, that Malignant ending & a secret streaming service
popular
Seven people hospitalised after huge fight at Tuam cemetery
One of the most-anticipated movies of the last few years is finally available to watch at home this week
Retail billionaire calls on unvaccinated people to be banned from shopping centres
Government announces special €1,860 payment for laid-off workers during pandemic
Simon Harris and wife welcome arrival of new baby boy
It looks like Garth Brooks will play FIVE nights in Ireland after all
Gardaí warn of scam involving "inappropriate or sexual images" after young boy blackmailed for money
You may also like
4 days ago
Ranking Daniel Craig's James Bond movies from worst to best
4 days ago
Daniel Craig says goodbye to James Bond in emotional farewell speech
5 days ago
The Ultimate Dwayne "The Rock" Johnson Quiz
6 days ago
Gunpowder Milkshake has the makings of a perfect Friday night movie
6 days ago
A brilliant Irish psychological thriller and 5 more movies and shows to watch this week
1 week ago
The most popular theory about The Matrix Resurrections is absolutely wild
Next Page