Seth Rogen slides into Donald Trump Jr.’s DMs “to remind him his father is a sexual predator”

You’d have thought Donald Trump Jr. would have blocked or at least stopped following Seth Rogen by now.

Not for the first time, the actor availed of an opportunity presented by the fact that the son of the President of the United States follows him on Twitter to slide into his DMs and tell him some home truths about his Dad.

This time, in the wake of the Harvey Weinstein scandal, Rogen saw fit to remind Trump Jr. of his father’s sketchy history when it comes to sexual harassment.

END_OF_DOCUMENT_TOKEN_TO_BE_REPLACED

Several women accused Trump of sexual harassment in the lead up to last year’s presidential election, when a leaked Access Hollywood recording surfaced of Trump boasting about being able to kiss and grope women because of his fame, a recording which included his infamous “grab ‘em by the pussy” comments.

Trump Jr. has been outspoken on the Weinstein scandal and the reaction to it in Hollywood on his Twitter account in recent days, prompting Rogen to send him a couple of DMs reminding him that maybe he should be looking a little closer to home.

Ahhh Hollywood, our moral authority. What would we do without their guidance? https://t.co/Jjv3BRwzMi

As he has in the past, Rogen then shared that private correspondence with over seven million followers on Twitter, throwing in a reference to Trump Jr.’s hunting trips and pictures showing him posing alongside dead animals while on safari in Africa for good measure.

Sliding in to @DonaldJTrumpJr DMs to remind him his father is a sexual predator like: pic.twitter.com/a1vW3A4YCk 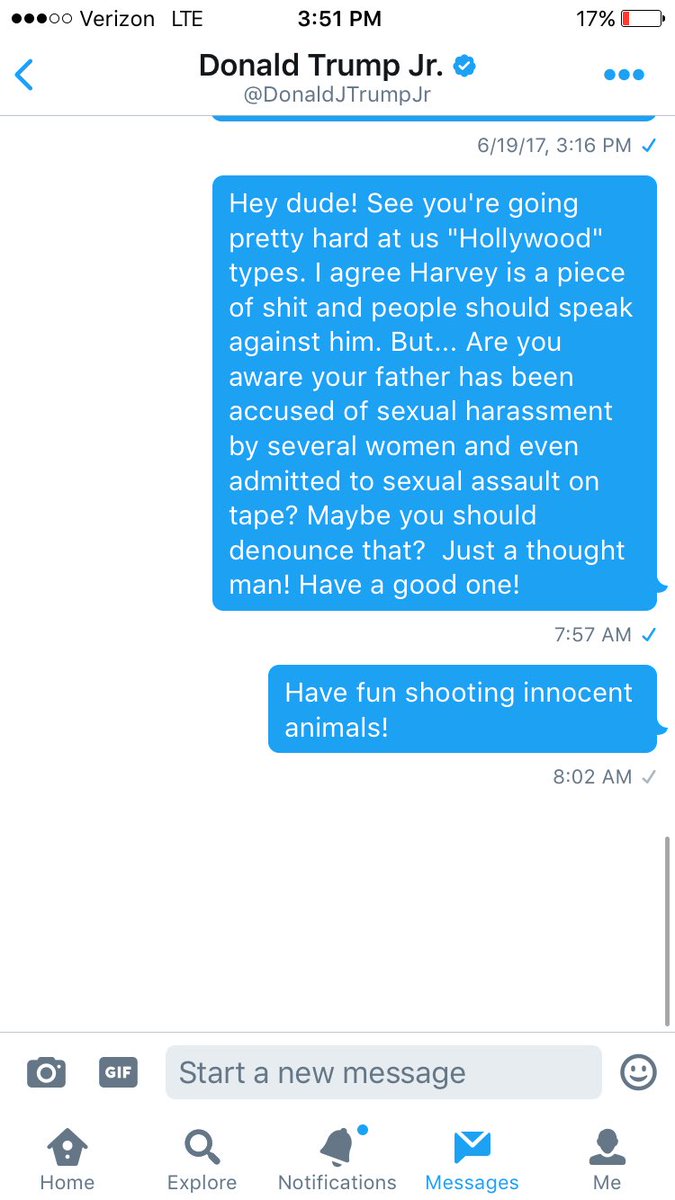