The theme for this year's Late Late Toy Show is Frozen

Not long to go now!

RTÉ has revealed that Frozen is the theme of this year's Late Late Toy Show, with Ryan Tubridy promising his "most outrageous" opening number yet tonight.

Tubridy is now in his 11th year hosting The Late Late Toy Show and will rely on help this year from 200 young singers, performers and toy demonstrators from around the country and some "incredible surprises and special guest appearances".

"There will be a lot of good this year and that will be obvious as soon as I step out in the most outrageous of costumes," Tubridy said. "It involves a very toothy grin - even my own weren't sufficient for the occasion!" 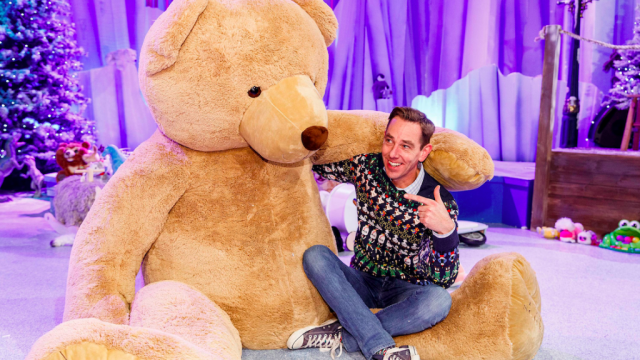 Nostalgia, family and the experience of watching the show together are at the heart of this year's festive feature, he said.

END_OF_DOCUMENT_TOKEN_TO_BE_REPLACED

"This year, viewers will get a sense of family, drawing from Anna and Elsa in Frozen and Frozen 2. A lot of the emphasis this year is on family and coming together and gathering to watch the show, as they have done for decades," Tubridy explained.

"It's not a picture-perfect portrayal of family, because every family is different and they come in all shapes and sizes. It doesn't matter once you are there together and are happy and surrounded by people you love, that's what it's all about," Ryan continued.

"People of all ages, sizes and walks of life come together. I'm asking everyone to put down there phone or tablet for two hours and talk about the show with each other."


popular
QUIZ: Can you guess the pixellated movie posters?
QUIZ: Can you name all these European countries just from their vowels?
Dublin pub to host a 'doggy date night' where you can bring your dog to dinner
QUIZ: Week 16 of JOE's 19 in 90 quickfire quiz is here
Here are Ireland’s favourite takeaways, as per the National Takeaway Awards
"Totally unacceptable." Final year students at WIT hit out after extra module added to final semester
Fine Gael and Fianna Fáil say Sinn Féin's rent-freeze proposal is unconstitutional. We asked a constitutional lawyer
You may also like
23 hours ago
New documentary series examines three brutal murders and a mysterious satanic cult
1 day ago
Haunting of Hill House star says the sequel will be more intense than Season 1
1 day ago
The creators of Star Trek: Picard put to rest one of the biggest fears fans might have about the show
2 days ago
Sky's new true crime documentary series examines a very sinister murder theory
2 days ago
HBO's documentary series about the Atlanta Child Murders to air in April
4 days ago
15 new documentaries you should be watching on TV in 2020
Next Page